Skip to content
Previous Next
Time to Get Birdy 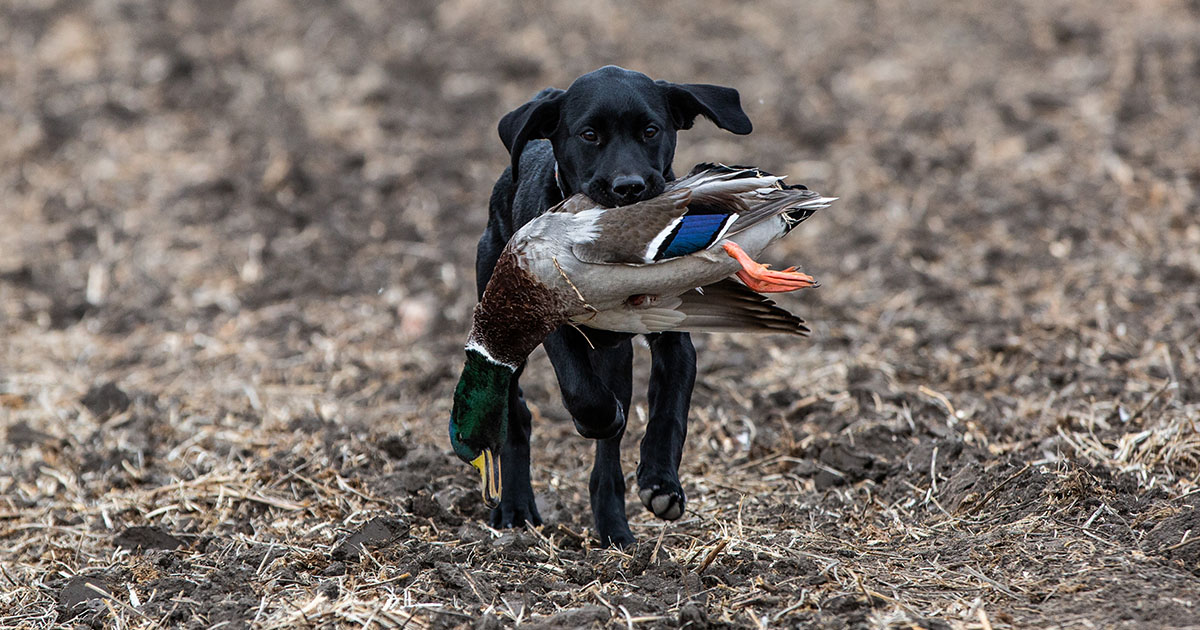 Sadie was our first retriever. We got her to keep my wife company when I was traveling, but having hunted over some amazing finished retrievers, I couldn’t help myself from trying to coax that kind of performance from our new puppy. Things went well until Sadie hit six months, and then each training session started proving she was smarter than me. Every fetched bumper became a game of keep-away that morphed into a game of tag, which led to my blood pressure rising and the air in the backyard turning blue.

We … I … needed professional help.

I had recently hunted over a friend’s remarkable young Lab in Ontario. I knew she was professionally trained, so I asked for my buddy’s advice. That’s how I met Jim Hildebrandt, a full-time cop who ran Sporting Breed Kennels as a second gig.

We met Hildebrandt in the training field early one July evening. He put up the dogs he was working with, took Sadie aside and pulled out a wing-clipped pigeon. He played with Sadie a bit, teased her with the pigeon, then tossed it a few feet.

I expected Sadie to bound to it, grab it and sprint away like she did with the bumpers, gloves, ball caps and anything else she could get in her mouth. Nope. She approached the bird somewhat timidly, nosed it and halfheartedly tried to mouth it, but pulled back at contact with feathers.

Hildebrandt picked up the bird, scooped up Sadie and walked back to us.

“Hasn’t been around birds much, has she?” he asked, to which I nodded. “Well, she’s got a little interest. I think we can still save her.”

Save her? What was he talking about? Over the next months and years, working with additional dogs and trainers, I learned.

Early and proper introduction to birds is the most important, fundamental life experience for any field dog. It took time, but we left Sadie with Hildebrandt that night to stay in training for the next six months. Over the years, she earned her AKC Master Hunter title and became the most reliable duck dog we’ve ever owned.

The best methods of bird introduction vary from trainer to trainer and even more so from pup to pup. However, they all have things in common. First, bird introduction should take place early. Second, it must be exclusively positive. Third, it must bolster the pup’s natural instinct and excitement about birds.

Early Birds
An initial bird introduction ideally takes place while the litter is still together. How and when birds will be introduced is an important question to ask breeders of litters you’re considering.

Try to be there the first time the litter meets a bird. How pups react, both individually and with littermates around, reveals their dispositions, the kind of training they will require, and how biddable you can expect them to be. Remember though, making these judgments is not a one-and-done thing. Pups change as they mature, and just like people, anyone can have an off day. Go see the pups interact with birds several times before selecting.

Good breeders will make interaction with birds a regular part of their socialization process. This lays the foundation for “bird craziness,” which is what you need.

When the puppy comes home, there should be no gap in its interaction with birds. Wing-clipped live birds are best, but dead (not frozen) birds will suffice. Pigeons or quail are the right size for puppies.

Keep it Positive
Early interactions must be exclusively positive. As in crate training, where you want to instill belief in the young dog that nothing bad can happen to it in its kennel, bird interaction should teach the pup that birds are always good. As the dog matures and training advances, there will have to be corrections related to birds, but that’s later on. For now, birds are good, good, good, and fun, fun, fun.

At some point, the pup may attempt to steal a bird, run away and mouth or chew it. The best option is vigilance and prevention, but pups find ways. Philosophies vary on what to do. If you have a strong-willed pup showing every sign of bird craziness, it’s probably OK to pry the bird away and offer a mild correction. But if you’re dealing with a pup showing a lukewarm inclination to birds, the right choice may be to just let it go — but only once — to build enthusiasm.

Build on Drive
Once confidence and enthusiasm with birds is established, it becomes a building block for more training and socialization.

For instance, once the pup is bird crazy, it’s time to introduce the gun. Get the pup’s attention and toss a flapping, wing-clipped pigeon. As it eagerly approaches the bird, reach behind your back and fire a starter’s pistol. Watch the pup’s reaction. If it’s really enthralled by birds, chances are it will pay the shot no attention. If its body language changes, get back to the exciting bird interaction and try again tomorrow.

If there’s no reaction, take the next shot out in front of your body. Gradually you can move closer to the pup, and move up to a .410 shotgun or light target loads. Block by block, you build to using a 12-gauge to shoot a flushed or thrown bird.

The result is a dog that not only doesn’t fear gunshots, but associates them with the thing it loves most — birds!