Delta’s focus on waterfowl hunters as the base of wetland and waterfowl conservation has made us aware of a looming crisis: Most wildlife management students — the future leaders of waterfowl management — have had little or no exposure to hunting, nor a first-hand experience of the role of hunting in North American wildlife management. Not surprisingly, this has led to a generation of employed professionals who lack an understanding of the ecological, economic, recreational and moral virtues of hunting.

At Delta, we see this as a huge problem for the future of hunting and management of wetlands and waterfowl. Students who don’t understand hunting and hunters might implement policy and management decisions that do not sustain waterfowl and their required habitat. These wetlands and associated uploads are important for a myriad of other species. We are already seeing a major change in emphasis away from game management to at-risk species in many of our state, provincial and federal agencies.

As a direct result of these concerns, Delta launched our new University Hunting Program in August 2017.

Participating university students will receive instruction as part of a regularly scheduled wildlife course. In many cases, participants will receive bonus points/extra credit for the successful completion of the main program components:

If you would like to learn more about the Delta Waterfowl University Hunt Program, please contact Joel Brice at jbrice@deltawaterfowl.org. 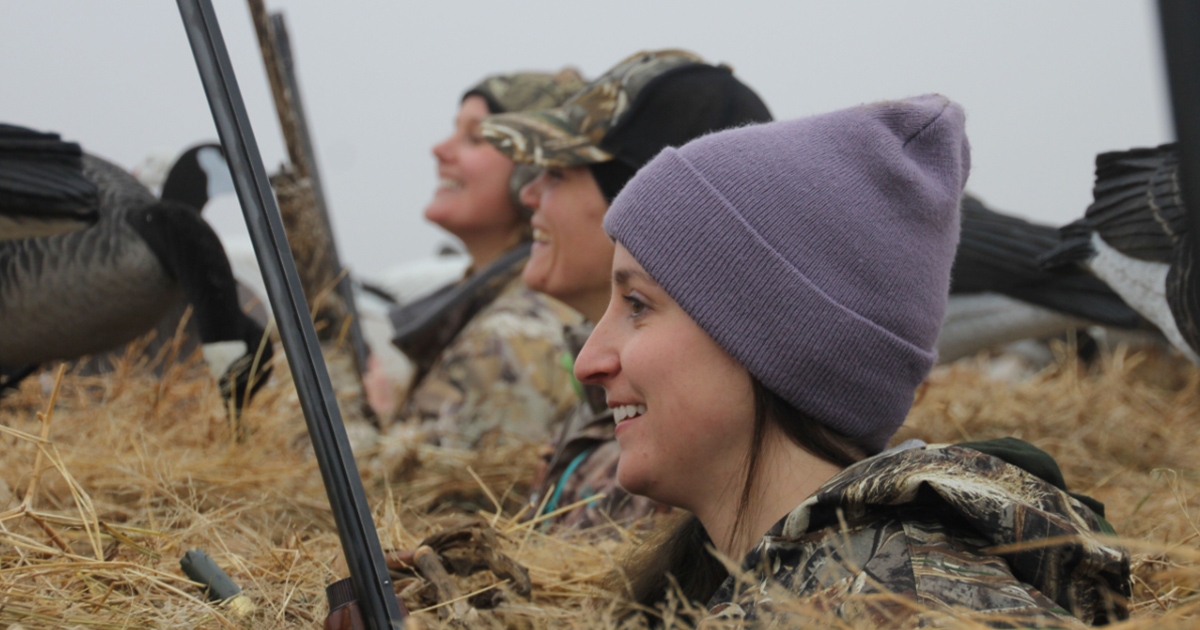 A safety briefing was provided, along with what to expect when geese were spotted. “One smooth move,” the students were told, would slide back their blind covers so they could shoot.

Then the cries of Canada geese resounded above, and when a massive flight broke through the low ceiling, the novice waterfowlers were mystified. Despite gusty winds centering the birds perfectly, most students held their fire.

“They were so awed by the number and proximity of the birds that they developed ‘buck fever,’” Koons said. “Also if you’ve never harvested an animal, that’s a powerful moment, and I’m sure it played a role. But they quickly pushed through and went full-bore.”

Delivered in partnership with universities throughout the United States and Canada, Delta’s University Hunting program arose in 2017 in recognition of a looming issue: Increasingly, aspiring biologists who will one day use hunting license and permit revenues to manage ducks, geese and other wildlife, are not hunters themselves.

“Not long ago, nearly every waterfowl biology student in North America was a dedicated hunter, but that’s no longer the case,” said Joel Brice, vice president of waterfowl and hunter recruitment programs for Delta Waterfowl. “We believe that’s a real problem, because waterfowl managers need a sense of hunting culture, and hunting’s role in conservation, to set appropriate hunting regulations and effective conservation policies. Our long-term plan is to expand the program to every major university on the continent offering a wildlife management degree.”

Buoyed by early successes, many more universities have expressed interest in implementing the program, so it undoubtedly will grow.

A wildlife professor at each University Hunting program-enrolled school develops a course curriculum with guidance from Delta Waterfowl. A variety of hunting topics are included, with special emphasis on the critical role hunting plays in managing wildlife and funding conservation. However, arguably the most impactful aspect of the course arrives at the grand finale: participation in an actual waterfowl hunt.

“If we can give the students that visceral experience of going on a hunt, it will leave a mark on their lives,” Koons said. “Even if they don’t become hunters themselves — though we hope they do — they’ll remember it someday when making high-level policy decisions.”

A group of Colorado State students will forever recall the foggy morning they spent hunting with Koons and guide Luke Schmidt of Last Pass Outfitters (who provided the hunt free of charge). Geese in groups of 25 to 100 repeatedly swarmed the spread.

“We had a morning of legs-down, wings-cupped geese and, incredibly, these first-time hunters began doubling,” Koons said. “One percent of me feels bad because they might never see something like that again.”

By 9 a.m., they’d shot limits of dark geese, plus a few snows and Ross’s geese. The unseasoned students, of course, lacked perspective.

“I’m told we were pretty spoiled,” said student Kristen Ellis, who enrolled in the course given her interest in wetland and shorebird research. “(Schmidt) was amazing with his goose call and I loved watching his dog work. It was just a really cool experience, and I would definitely go again.” — Kyle Wintersteen