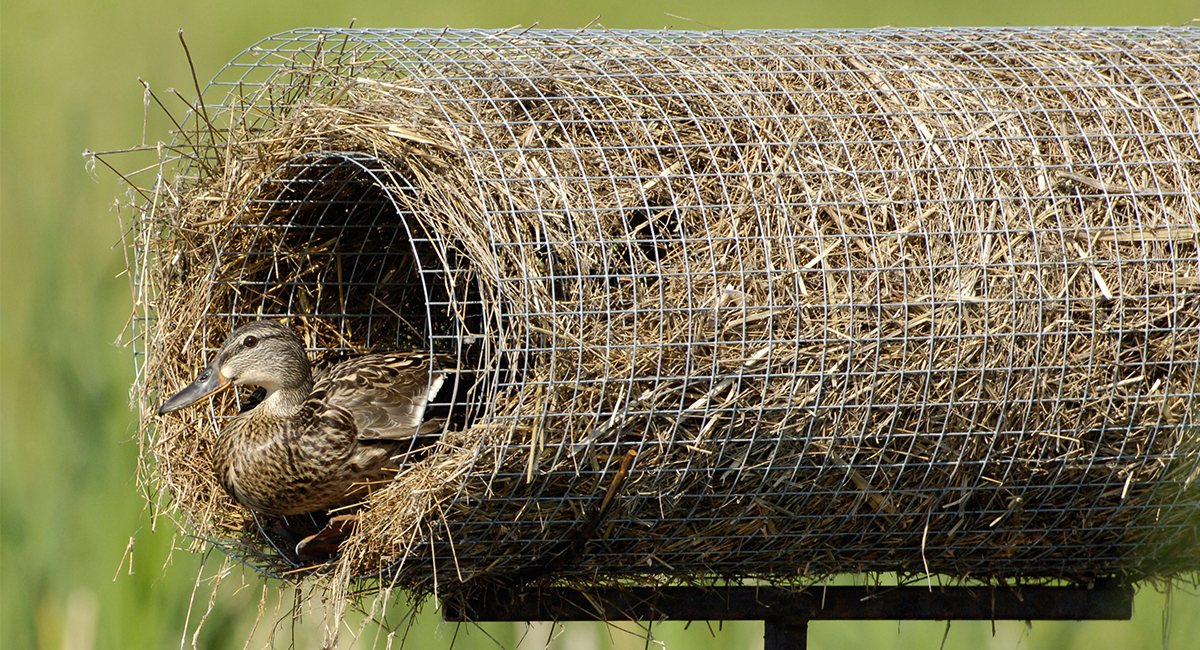 Delta Waterfowl Hen Houses are the most cost-effective tool to increase mallard production. Targeted to areas of the highest mallard breeding density, Hen Houses consistently boost nest success to more than 60 percent and commonly to 80 percent — in areas where ground-nesting mallards typically achieve nest success of less than 10 percent.

Delta maintains Hen Houses across the key breeding areas of Manitoba, Saskatchewan, Alberta, North Dakota, Minnesota and Ontario. By 2020, Delta will have nearly 9,000 Hen Houses available for hens, with over 42,000 ducklings hatching in them annually. Delta volunteers also manage and maintain over 5,000 Hen Houses.

How to Build, Install and Maintain Your Hen House

How to Build a Wood Duck Box

The wood duck or “woodie” is very popular amongst North American waterfowl hunters and for good reason. Not only are they one of the world’s most beautiful ducks, they are typically considered among the tastiest too. But perhaps the wood duck’s most valuable attribute to hunters is their distribution. Wood ducks nest throughout much of the U.S. and provide good waterfowl hunting opportunities where other duck species are uncommon. In fact, more wood ducks are harvested in the Atlantic Flyway than any other duck species! Across all flyways, wood ducks rank amongst the top five species in total harvest over the last 15 years.

Though one of our most common waterfowl species today, conservationists once believed the wood duck was on the verge of extinction. In the late 1800s, waterfowl hunting was unregulated and wood ducks were harvested year-round in some areas. In addition, bottomland forests in the U.S., critical feeding and nesting habitat for woodies, were disappearing. Wood ducks utilize natural tree cavities for nest sites and as older forests disappeared, so did available locations for nests. The wood duck population plummeted and wood ducks were considered rare in many parts of North America. By 1916, hunting of wood ducks was prohibited in 22 states and by 1918 wood duck hunting was closed nationwide with the passing of the Migratory Bird Treaty Act. The wood duck season remained closed for over 20 years (1918 – 1941).

The comeback of the wood duck is a true conservation success story. Harvest restrictions and improved habitat were critical to their recovery, but a creative artificial nest cavity (wood duck box) was also important. In 1937, the U.S. Biological Survey (USFWS) tested the first wood duck boxes in Illinois. Wood ducks proved to be very adaptable, and over 50% of the boxes were used the first year. The success of those first 486 boxes prompted the expansion of wood duck boxes throughout North America. Nearly 75 years later, it’s estimated that wood duck boxes produce 100,000 – 150,000 additional wood ducks each year.

The wood duck or “woodie” is very popular amongst North American waterfowl hunters and for good reason. There are many safe and effective wood duck box designs available to conservation enthusiasts. We recommend wooden boxes because they are less prone to extreme heat build-up that could endanger a hen or her eggs. This is especially important for folks in the southern U.S., where temperatures regularly exceed 90° F during the nesting season.

The cedar box, designed by Minnesota wood duck expert Don “The Duckman” Helmeke, has been found productive and safe for wood ducks throughout North America. You can use just about any type of wood to build your nest boxes, but cedar and cypress are more weather-resistant and will last longer. We also recommend installing a predator guard on each wood duck box post. Boxes are more beneficial to wood duck populations if they improve nest success over natural cavities. Cone-style predator guards are very effective at reducing mammalian predation, especially when you install your boxes on land. Here are some instructions for building and installing a cone-style predator guard.

Here are a few wood duck box basics when picking a location for your wood duck box(es). First, there must be adequate wetland habitat nearby for the hen and her ducklings. Though wood ducks may nest a mile or more from water, ducklings are more likely to survive if overland travel is minimized. Also make sure there are clear flight lines to the box opening and an easy path to the water. If you’re installing multiple boxes, try not to install them within sight of another box.

Perhaps most important is selecting a site that can be easily accessed for annual maintenance. Annual maintenance (i.e., clean out and replace wood chips) is critical if you want to ensure your wood duck boxes are consistently productive. If boxes are hard to access, boxes often become neglected and use by wood ducks will decline. We recommend performing maintenance in late winter, just before wood ducks begin searching for nest sites. This date changes with latitude, as boxes in the southern U.S. should be maintained by late January. In northern states, the first wood ducks usually return around mid March.

Once you find the right location, a wood duck box can be mounted on a variety of surfaces including trees, posts, and the side of your house or barn. Though it seems natural to install them on trees, the safest location is on a wood or steel post with a cone-style predator guard.

There are great resources for wood ducks in print and on the internet. The most comprehensive information on wood ducks is the book Ecology and Management of the Wood Duck, written by Frank Bellrose and Dan Holm. Another great source of information is the Wood Duck Society. Their website is www.woodducksociety.com.