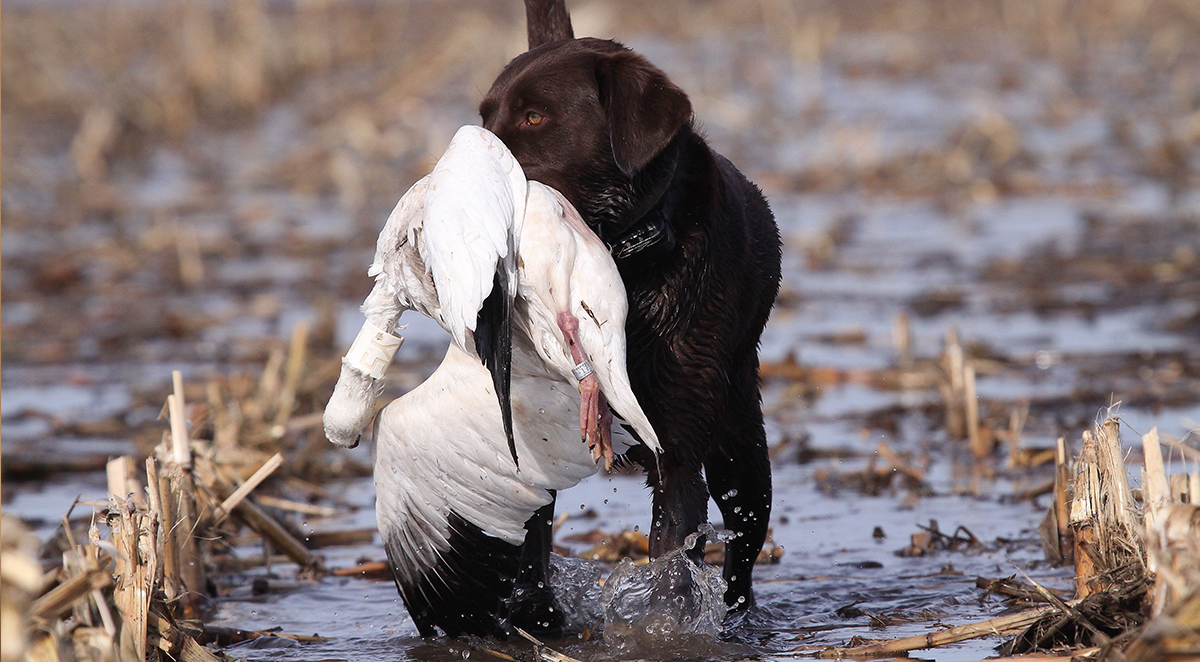 The blue-phase snow goose stands out as it descends from a whirling, veritable sea of white, its rosy red feet touching down mere yards from hunters’ boots. Hundreds of snows circle the Saskatoon sky, and the rush of the new experience nearly exceeds what this Pennsylvania mallard hunter can bear. The swirling mass of snows gradually decrease the width and altitude of their swings, but my attention is on the blue goose afoot. Its pure white head creates a lovely contrast against its darkly hued breast. Just as I selected a place for it on my wall, the goose took flight.

My first taste of the thrill and challenge of snow goose hunting made me want
to chase the birds from Canada to Louisiana and back again. Some hunters follow the spring migration, while others participate in Light Goose Conservation Order hunts locally to extend their waterfowl seasons. Regardless, spring snow goose hunting offers opportunity to hunt geese well into May. If you’d like to take full advantage, consider these five top spring destinations. 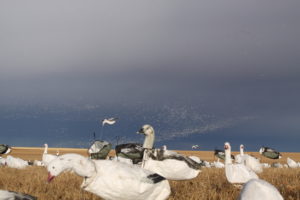 The rice belt of eastern Arkansas is well known as a first-rate mallard destination, but more quietly, it’s perhaps the best place in North America to kick off the spring snow goose season.

“Arkansas gives you one of the first cracks at the birds, before they’re as wary,” said Tracy Northup, owner of Up North Outdoors and Deadly Decoys. “Local hunting pressure also tends to be lower than Missouri, the Dakotas and elsewhere.”

Arkansas winters a sizeable number of snows, but the best hunting typically occurs around mid-February as northbound geese pile out of Louisiana and Mississippi, using the river as their guide. The migration’s timing is heavily weather-dependent, of course. Following last winter’s severe cold, a farmer called Northup in mid-March to report the most snows in his field he’d ever seen.

The state offers vast stores of flooded rice and water, solidifying its importance as a major staging area for hundreds of thousands of hungry snows. However, ample food means the geese don’t concentrate as heavily as in more northern locales, so scouting a good flight path is key.

“In Arkansas and really everywhere I hunt snows, I prefer to find a good migration corridor and decoy birds beneath it. I’ve never been a big ‘find the X’ type of hunter,” explained Northup, who typically uses about 2,000 decoys. “The birds may follow the river or a ridge or treeline, but there’s usually some sort of terrain feature involved. When we find the right travel lane and the migration is on, we tend to do well.”

The best spring season bet for Atlantic Flyways hunters, or anyone in search of a greater snow goose, is the Delmarva Peninsula — that gloriously historic waterfowl destination otherwise known as the Chesapeake’s Eastern Shore. More greater snow geese winter in the region than anywhere else in the United States, concentrating from Atlantic City, New Jersey, to North Carolina’s Pea Island National Wildlife Refuge.

“In my opinion, the hunting actually tends to improve through February as the birds consume the remaining crops and begin to move north,” said Captain Pete Wallace, head guide for Virginia’s Chincoteague Hunting and Fishing Center. “The flocks are smaller — everything from singles to 75 or 100 geese — so they usually seem to work better. But keep in mind they’re still the hardest bird to hunt for every reason waterfowl are hard to hunt. The snows on the Eastern Shore tend to roost on the many National Wildlife Refuges, fly in the stratosphere to a feeding location, and that’s it. They’re really tough to kill.”

Wallace’s strategy involves using the most realistic decoys available — he prefers full-bodies — and setting up on a pond or marsh as an added draw amidst the largely farmed peninsula. It’s a somewhat less conventional strategy that results in first-light shooting much of the season.

“We’ve always had birds in February and usually in early March,” Wallace said. “But then it’s over. I think we’ve somewhat extended the season beyond the birds.”

Positioned in the Mississippi Flyway, yet close to the Central Flyway, Missouri’s ideal geographic location and grain resources annually support a huge portion of the massive mid-continent flock.

“Snow geese converge on Missouri from both the southeast and southwest, which is a big reason why areas like those around the Squaw Creek National Wildlife Refuge are so legendary,” said Jon Eaton, owner of Show Me Snow Geese. “Once the birds start showing up, they generally number well over a million and there’s a constant flow of new geese. The birds we shoot Monday won’t be the ones we shoot Friday, which is what every hunter wants.”

An abundance of rivers and a rich framework of irrigation ponds provide loafing and roosting areas, while flooded rice and soybeans in the south and corn in the north offer sustenance.

“The hunting in the south resembles the flooded fields of Arkansas and Louisiana, and the rolling cornfields to the north are like you’re in South Dakota or Nebraska,” Eaton said. “As the season progresses, we get to experience numerous styles of hunting.”

Eaton employs a spread of 1,500 to 4,000 decoys. In northern Missouri, he prefers to hunts fields with ponds and often positions floater decoys in them.

“Floaters work wonders up north,” he advised. “But in the southeast they’re less beneficial because there’s water everywhere and fewer predators. We’ve often found birds just roosting in fields, even 100 yards or so from where we’d set our spread on a feed site.”

The best time to hunt Missouri is typically February to mid- or even late March. Last season, Eaton saw plenty of action right up until April 1.

As spring snow goose seasons commence, the mid-continent snow goose population spans much of the American south and dips into eastern Mexico. However, the flocks gradually converge as they head north, and hundreds of thousands are funneled through eastern South Dakota.

“We get an incredible number of birds following the Missouri and James River systems to their northern breeding grounds,” said John Neu, owner of Neu Outdoors. “They tend to stay for quite a while, too, because severe weather to the north forces them to hole up and there’s plenty to eat and drink.”

“It’s usually pretty good throughout that timeframe, weather-dependent,” Neu says. “I always like to be out there, because you never know when those 100-bird days are going to hit.”

Hunters need to account for the swirling spring winds across the vast, flat eastern Dakotas.

“We normally use a donut spread — a circle of decoys with our layouts in the middle,” Neu said. “The snow geese like to land right amongst the decoys, and all we have to do is rotate the layout blinds when the wind changes to keep it at our backs.”

April to Late May: Saskatchewan

While many hunters are busy pursuing turkeys by April, there’s a last opportunity for waterfowling action: Saskatchewan is the final staging grounds for spectacular numbers of lesser snows and Ross’s geese. Huge flocks gather along the prairie and parklands habitats, feeding heavily and resting prior to their mass exodus to the northern breeding grounds.

There are two chief differences in hunting Saskatchewan compared to other spring destinations: The snows have seen eight months and thousands of miles of intense hunting pressure, and they tend to arrive and leave essentially at once. Hunters often find themselves targeting the same wary geese for much of the season, which also challenges those who wish to “traffic” birds — a far more effective tactic for newly arriving geese.

No waterfowling venture is impossible, but on paper, a May snow goose hunt comes close. Yet a host of perseverant guides and hunters consistently get in on the action every year. Above all, they scout as frequently as they hunt in order to find thousands of energy-starved snows targeting the remaining agriculture fields. Then they adjust their bag of tricks in every way imaginable to find a tactic — any tactic — that draws the educated birds. They hunt huge spreads and small spreads, windsock decoys and full-bodies, try heavy calling and minimal calling, hunt at odd hours, doing whatever it takes to find success.

The challenge of decoying snow geese in May is among the most trying feats in waterfowling, but that’s part of the appeal. The geese have run the gauntlet to the southern United States and back, so hunters who kill them prove they are highly skilled.

If you do so, savor the victory. You’ve earned it.