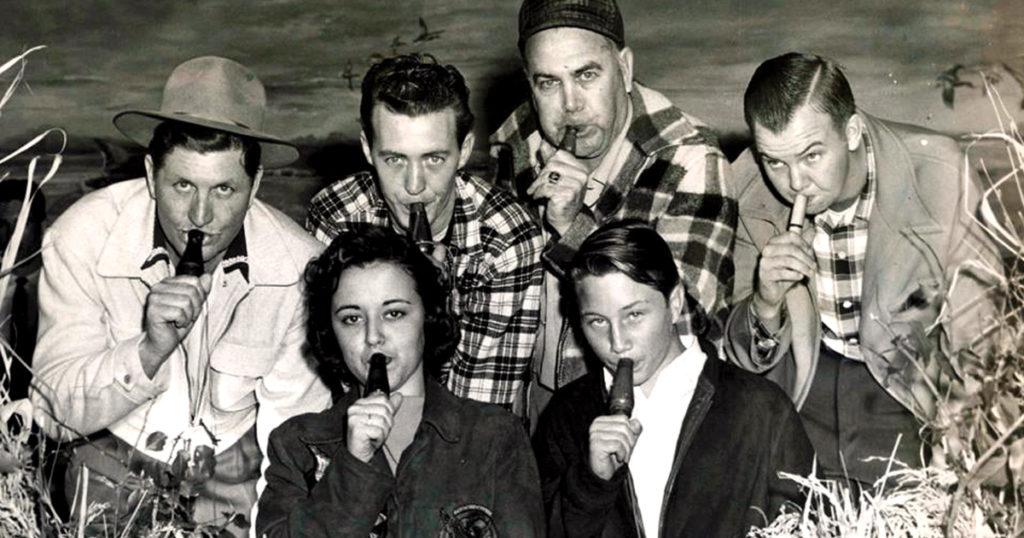 Great waterfowl callers can bring birds down from the stratosphere and coax them into joining a group of fake brethren, but only one person lands the coveted title of World Champion each year.

Every November, the best duck callers from across the nation — all winners of various state and regional contests — gather in Stuttgart, Arkansas, to compete in the World’s Championship Duck Calling Contest, held in conjunction with the annual Wings Over the Prairie Festival.

Winning Without Calls
Originally called the National Duck Calling Contest, the event began in 1936 as waterfowl populations began to recover from drought and market hunting. 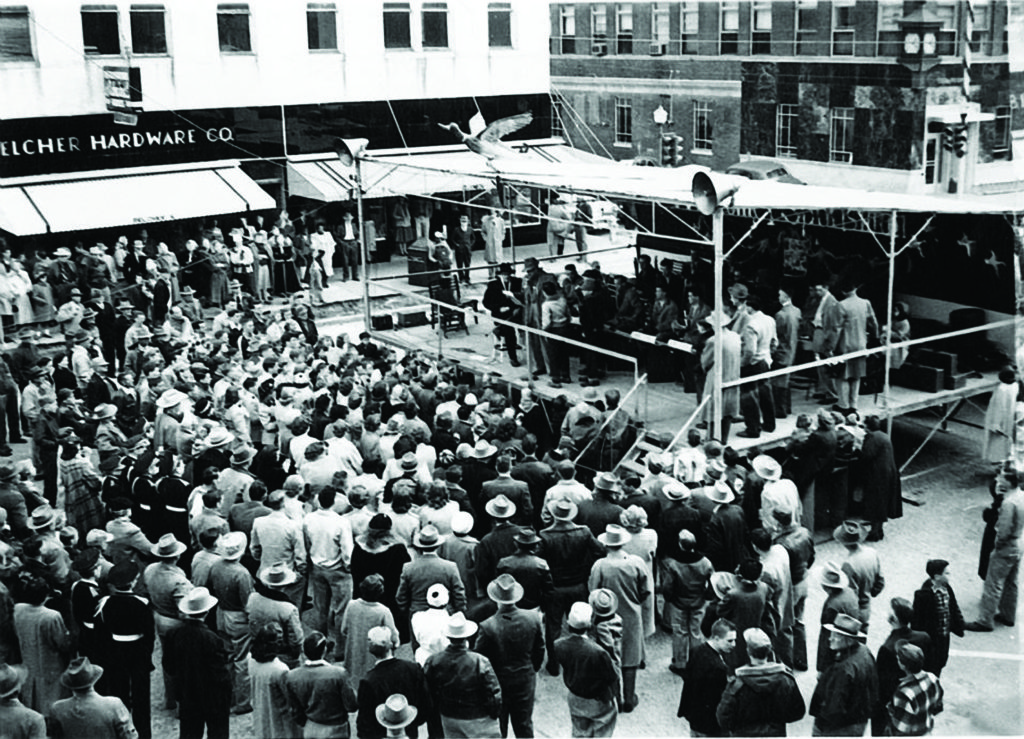 In that first contest, 17 men competed and the winner didn’t even use a call. Thomas E. Walsh of Greenville, Mississippi, won by using just his mouth to replicate duck sounds. He earned a hunting coat valued at $6.60 for his effort. By contrast, this year’s overall winner will receive a prize package worth more than $15,000. But every year, the winner captures a coveted world championship title and permanent bragging rights.

“Tom Walsh was a natural voice caller who raised ducks,” explained Jim Ronquest of Rich-N-Tone (RNT) Calls, who didn’t need to travel far from his home in Stuttgart to win the championship in 2006. “He learned to imitate every sound ducks made.”

Only one other caller took the title without using a call — Herman Callouet, also from Greenville, Mississippi, in 1942.

Women commonly venture into the outdoors today, but in the 1950s, few women hunted. Fewer called ducks. And yet while women routinely compete against other women in the current era, only one woman, local favorite Pat Peacock of Stuttgart, ever beat the men for the overall title — and she won back-to-back in 1955 and 1956! 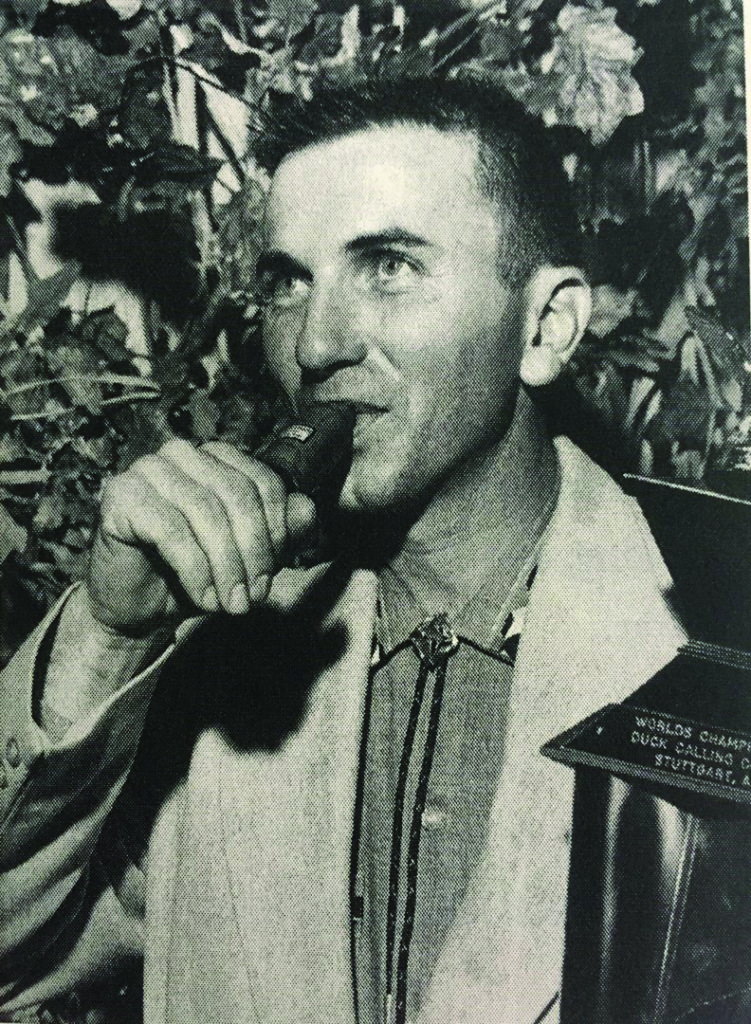 Three years later, a young Texan came to Arkansas with something new. While Walsh and Callouet called with just their throats, James “Cowboy” Fernandez of Groves, Texas, used a special invention: a Yentzen double-reed duck call. It helped him win the first world competition he ever entered.

Fernandez followed that by beating the four most recent champions in the Champion of Champions contest. Soon afterward, Johnny Carson even invited him to appear on “The Tonight Show” to demonstrate his calling.

“When the other competitors weren’t looking, I caught them sleeping,” Cowboy modestly quipped about his 1959 win. “I started working with George Yentzen of Nederland, Texas. Before he died, he told his wife to tell me to start blowing and making calls. I took the inside apart and changed the tone board and the reed system. I spent the whole weekend before the contest developing that sound and perfecting calls so they would sound like a duck. All the others were blowing single-reed calls, but they didn’t sound nearly as ducky as I did.”

Yentzen patented his double-reed call in 1950, but the calls really didn’t take off until after Fernandez tweaked the design and won the world championship. Yentzen died shortly before the 1959 contest, but his double-reed sound dominated the waterfowling market for the next two decades. Sure-Shot Game Calls still makes its now-famous Yentzen duck call.

“In 1959, we had 52 state and regional winners all doing their best calls,” recalled Cowboy, now the oldest living former champion at 85 years old and a Legends of the Outdoors Hall of Fame inductee. “We were all friendly with each other, but the competition was intense. We all put in a lot of time and were there to win. Three of us were sharing a hotel room, including the current reigning champion. I nodded off and was making duck sounds in my sleep, but I heard one of them say, ‘That’s the guy we have to beat tomorrow.’ I just got lucky and made the calls the judges wanted to hear.”

How to Call for Judges 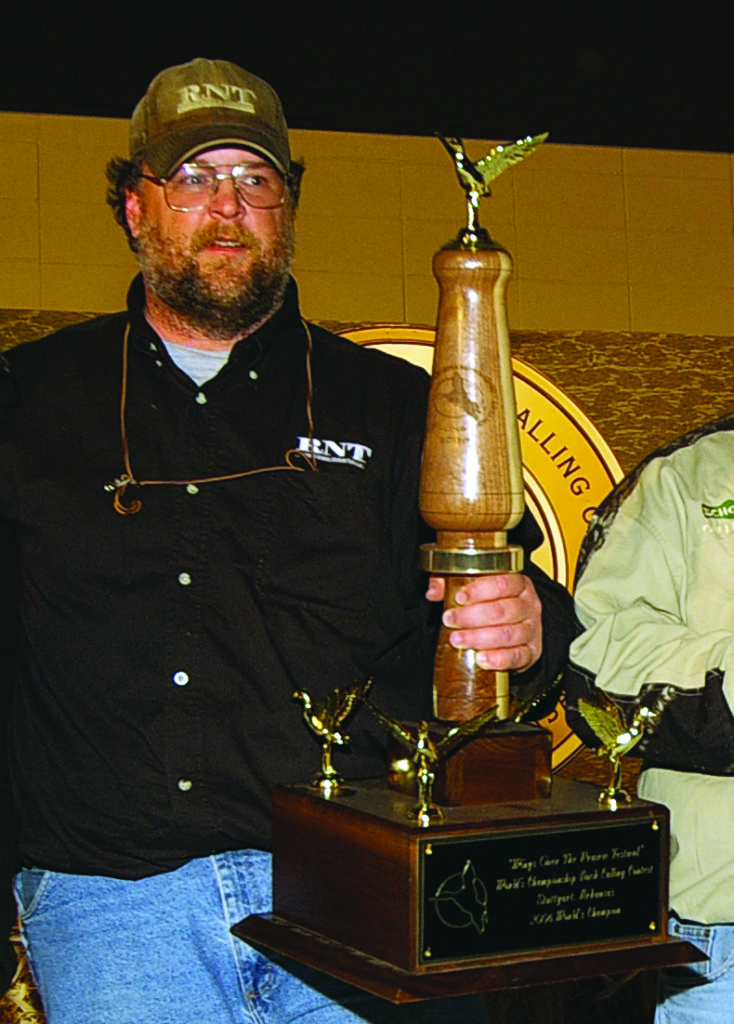 Callers still need to imitate ducks, but the contest has changed over the years. Today, callers must please the judges by painting a scenario with a 90-second routine. They begin with a loud, boisterous “hail” call as if a hunter spotted a flock a long distance away and wanted to attract their attention. Then, the caller blows as if the ducks approached the decoys, but flared away. Finally, the caller must make enticing notes as if finishing the birds into the decoys.

“A lot of guys say, ‘They can call judges, but they can’t call ducks,’” Ronquest said. “There might be some truth in that. The contest is still very rooted in calling ducks, but calling a duck is different from calling to impress a judge. In a contest, we’re playing a tune for 90 seconds. In a real hunting situation, someone doesn’t have 90 seconds to bring in the ducks. The ducks might come in 10 seconds, circle for five minutes, or not come at all.”

Calling techniques have evolved over the years, but the competition remains extremely intense. For many callers, that final 90 seconds culminates long hours, perhaps over many years, preparing just for that moment. The final moments before a contestant takes the stage seem to last forever. Each caller knows that one sour note or a second too long could eliminate years of preparation and an otherwise great routine.

“People get really nervous sitting in what we call ‘the bullpen’ waiting for their turns,” Ronquest said. “Some people go to the bathroom several times before they get on stage. In my first year at the world championship, I didn’t think I had a chance to win. I was clicking along and then started thinking, ‘I’m blowing pretty good.’ Then, my knees went weak and I made all sorts of bad racket. It’s friendly, but it’s intense competition. We’re all good friends until we get up on the stage. Then, we want to crush them!”

For more than eight decades, the best callers have challenged each other in Stuttgart for the title. The latest wave of hopeful competitors will do so again this fall, but only one will emerge as the 82nd overall World Champion Duck Caller.

Want to Attend?
The 2017 Wings Over the Prairie Festival is Nov. 18 to 25 with youth, women and men competing in the 82nd annual World’s Championship Duck Calling Contest throughout the festival. For more information, call the Stuttgart Chamber of Commerce at (870) 673-1602 or visit stuttgartarkansas.org/duck-festival.