Skip to content
Previous Next
The Other Snow Goose

The Other Snow Goose 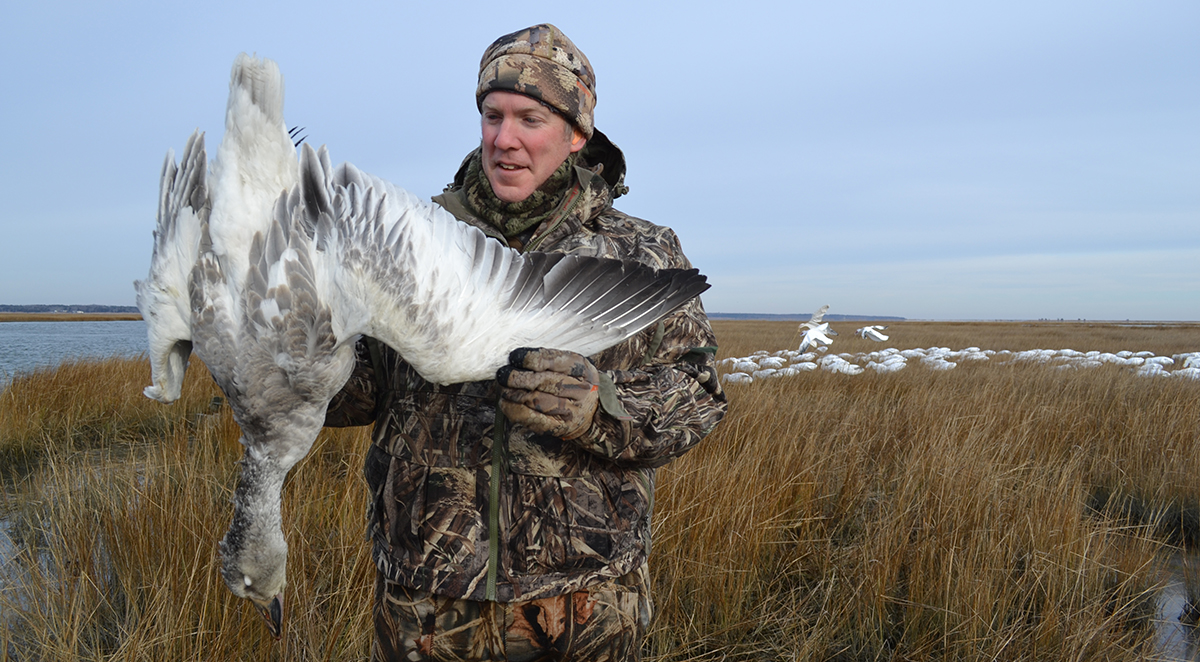 The scene was both beautiful and rather surreal as hunters arranged windsock-style snow goose decoys on an island of marsh grass, backlit by the neon skyline of Atlantic City, New Jersey. I wasn’t visiting the salty bays surrounding the famous vice town for blackjack or poker, but rather to gamble my fortunes on the greater snow goose. 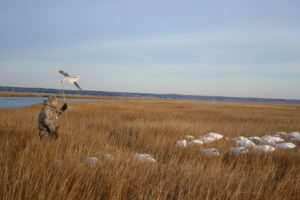 Despite hunting the Atlantic Flyway for more than two decades, I’ve never resided in a good area for the eastern, largely coastal-oriented bird. The greater snow goose’s love of the sea, in itself, has long fascinated me, given its contrast to the inland tendencies of the far more prolific — and therefore much more attention-gaining — lesser snow goose. Although the greater snow has discovered the energy advantages provided by modern agriculture, it stuck to its traditional ecology longer than its western cousins. Hunters have only recently begun killing these geese over waste grains. Still, greater snows continue to provide ample hunting opportunities over water in locations with sufficient aquatic vegetation.

Preferred wintering habitats predominately include the coastal bays and marshes stretching from from New Jersey to the Carolinas. As greaters return north during March conservation seasons, they can be intercepted with better frequency in landlocked areas. Notable stopovers include southeastern Pennsylvania’s Middle Creek Wildlife Management Area, where more than 100,000 have been surveyed in recent years.

The greater snow’s migratory journey is one of the longest of all geese, typically about 2,500 miles from the Atlantic coast to the upper reaches of the Canadian Arctic. Think about that: To shoot — or merely to see— a greater snow goose is to connect with a bird that’s visited essentially the North Pole.

Given the unforgiving nature of such breeding territory, greaters encounter little resistance to production. Though nest predation occurs by arctic foxes and various birds including ravens, the greater population has exploded from a dismal 3,000 in the early 1900s in the wake of market gunning to a 2016 population estimate of 915,000. Like lesser snow geese, which number in the millions and provide opportunity for countless more hunters, the greater is today considered too prolific for its own good.

How fortunate today’s waterfowlers are to serve in a conservation mission that includes hunting greater snow geese well into spring. However, such pressure — plus the snow’s intellect and long lifespan — have made the greater population a notorious challenge. Many a hunter has watched the birds hopscotch from roost to refuge, at best tempting one’s thumb to inch toward a safety.

In my experience, hunters who bag greaters with consistency are to be considered among the continent’s most skilled waterfowlers. The birds will reveal themselves by the thousands in a field one evening and often return in the morning — unless you obtained permission — in which case they’ll somehow reach the unanimous decision to find chow elsewhere. Recently arrived migrants, particularly with plenty of juveniles, are of course the easiest to bag. However, the advantage doesn’t last long: These geese are remarkably adept at discerning the safe areas to loaf and feed.

The greater snow goose is a fickle bird. A smart bird. A bird that’s so often skirted my efforts and indulged me to spike my hat in the mud. Yet how I respect it, how I long to see it gliding in, with an outstretched white belly contrasting with those lovely black primary feathers.

For now, my closest encounter occurred on the aforementioned morning in New Jersey. Flock after flock poured overhead, taking on a lovely orange hue as the coming day reflected upon their breasts. I was admiring the tail-end of just such a gaggle when my buddy Dan said, “Kyle turn and kill this bird.”

I spun awkwardly in the muddy A-frame to find a single snow towering high above the spread. My gun mount was poor, but there was no time for adjustment and so I swung forward of the greater’s pink bill and took a crack. As I came out of recoil, I watched its head snap rearward, and to my sincerest surprise, it tumbled to the water with a satisfying splash.

The bird was a juvenile, but my spirits weren’t dampened. I’d shot a greater snow goose, and having done so, I had increased appetite to pursue another.