Skip to content
Previous Next
Sliding Through the Cattails

Sliding Through the Cattails 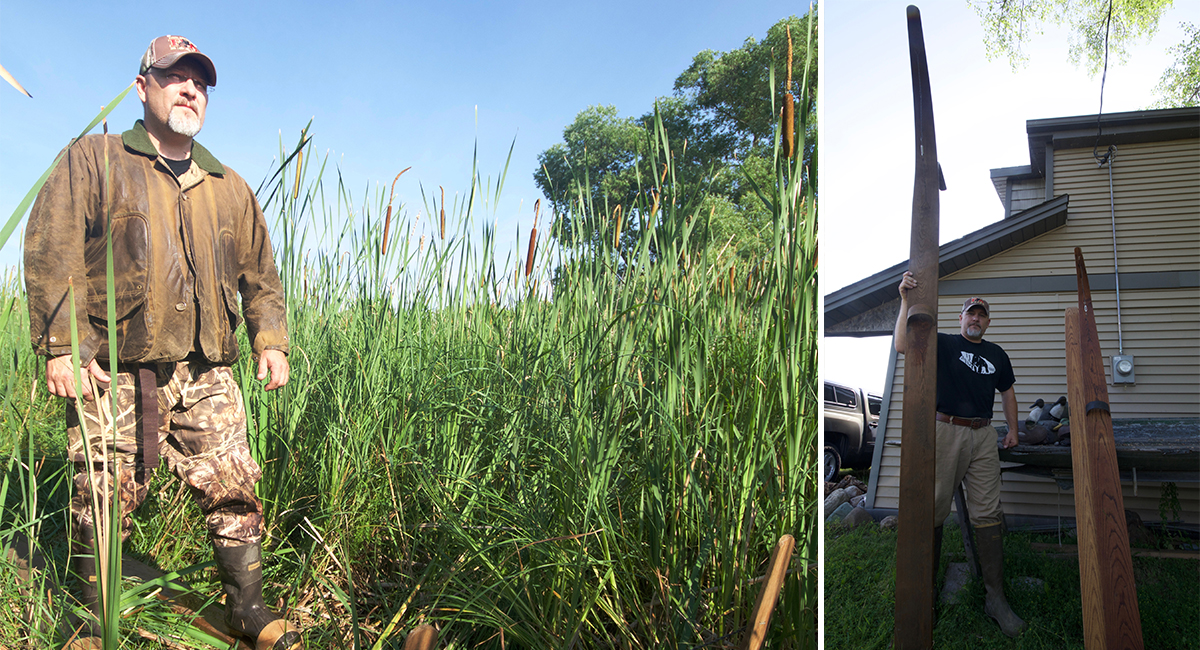 The long-time Wisconsin waterfowl hunter just grabs his shotgun, stuffs his jacket with steel shotshells and straps on his skis. Then, riding on a pair of long, narrow strips of planed wood, Kakatsch glides over floating bogs and through thick vegetation that would swallow any wader-clad hunter within a few steps and snub even the most revved-up mud motor.

“Marsh skis are a little tricky to use,” Kakatsch said. “There’s definitely a bit of an art to it, and it’s a big workout to ski through the marsh. But you can get to places other hunters just can’t go.”

Most waterfowl hunters aren’t willing to take such extreme measures, even if it can lead to an amazing bounty of ducks.

As much as Kakatsch thrills at finding secret pockets of unsuspecting mallards, wood ducks and teal, he revels more in carrying on the tradition of hunting on skis. Consider this: He owns 18 pairs of marsh skis.

Uniquely Wisconsin
Although it’s uncertain who first crafted marsh skis for duck hunting, there’s little dispute that they sprang up in Wisconsin. The state’s notoriously boggy marshes make access difficult by boat, and their soft bottoms are impossible to wade. But those alluring duck holes way back in the cattails undoubtedly led an enterprising hunter from the Badger State who was also a snow skier to adapt a pair of skis for marsh use in the early 1900s.

The method caught on, and soon, other hunters were strapping long planks to their boots in pursuit of ducks.

According to Koch, Ted Dorschner of Zittau, Wisconsin, made skis commercially from the 1920s to the 1950s. Dorschner and his son made about 200 pairs of marsh skis a year. Wally Marquardt of Larsen, Wisconsin, was another notable marsh ski maker.

Not surprisingly, Kakatsch owns vintage marsh skis made by both Dorschner and Marquardt.

Specialized Skis
Most of these specialized skis are made of ash, a flexible wood that can be boiled or steamed and then bent into the desired shape.

Marsh skis are long — at least 10 feet — with many up to 12 feet. The best skis have a foot or two of curl on the tips to help a hunter get through the cattails without getting stuck. Kakatsch said that without the curl, the tips of the skis would dig under the bogs or wedge into the cattails, likely sending the hunter face-first into the muck.

Most of the skis Kakatsch owns are narrow, only 5 or 6 inches wide. While a wider ski might improve balance, there’s a trade-off.

“You need to keep them narrow,” he explained. “The more surface area you have, the harder you have to work to walk on them. You have to remember that wherever you go on skis, you have to get back on them, too. It’s a workout.”

The binding is not like a snow ski. A simple loop strap is all that holds a hunter’s wader boots to the skis.

“The best binding material is a piece of firehose or innertube material that allows the hunter to slip skis on and off easily,” Kakatsch explained. “Sometimes, you need to kick them off to shoot or turn.”

Bygone Tradition?
Kakatsch started skiing for ducks in the 1980s, first at Nemahbin Lake, and then at Horicon Marsh, where he still hunts on skis today.

“My grandpa had marsh skis stored in the garage,” Kakatsch recalled. “I asked him what they were. He told me that when I got old enough, we’d go out on the skis. When I was 14 years old, he gave them to me and said, ‘There you go.’ So I put them on and went into the marsh.”

Marsh skiers generally either jump-shoot a number of small spots, or travel into a remote pothole and set a couple decoys to wait for action.

In either case, a hearty, reliable retriever is essential, according to Kakatsch.

“You need to have a good dog that can retrieve on sight and sound,” he said. “And the dog has to know not to step on the back of your skis.”

As a young hunter, Kakatsch discovered that his skis led him to ducks on days when other waterfowlers would get skunked.

“Back in the late 1980s at Horicon, you wouldn’t hardly hear a shot out on the open marsh, but you could ski out to a pothole and be buzzed by ducks,” he said, recalling a hunt when 300 mallards piled into a one-acre hole, and another day when flock after flock of green-winged teal landed all around him while on skis.

Kakatsch lamented that marsh skiing seems to be dying out, although a few hunters still enjoy the challenge and rewards it offers.

“No one makes marsh skis anymore,” he said, with more than a hint of sadness. “And most of the best locations to use them are gone now.”

Still, as long as there’s a secret pothole brimming with waterfowl, Kakatsch will ski.