Skip to content
Previous Next
Plan Your ‘Hunt of a Lifetime’

Plan Your ‘Hunt of a Lifetime’

Let’s set one thing straight from the get-go: Hunts are like fingerprints and snowflakes — no two are alike.

We’re all looking for that “hunt of a lifetime.” If you plan it correctly, your dream hunt will be so enjoyable you’ll want to return again and again.

A friend always dreamed of hunting in Africa. He read and watched videos about Africa all of the time. He set aside money in his “Africa Account” for years. He researched deeply and asked safari operators endless questions. When his bank account was flush and he amassed vacation time, he took his wife and daughter to hunt Africa. His plan was to take a few favorite animals and have ample time for sightseeing. It was to be the family’s once-in-a-lifetime adventure.

Because of his careful planning, and because they worked so hard to afford it, their whole trip was wonderful. They enjoyed it so much they’re now socking away money faster than ever. They vow to go back as often as they can. Their “once-in-a-lifetime” trip turned into what will be the first of many.

Do all of the research, planning and reference checking in your power (plenty is available thanks to the internet), but first dig deeper. What will really make it the trip of a lifetime for you?

If the goal of your hunt is to make memories rather than tally a body count, every hunt can be the hunt of a lifetime. 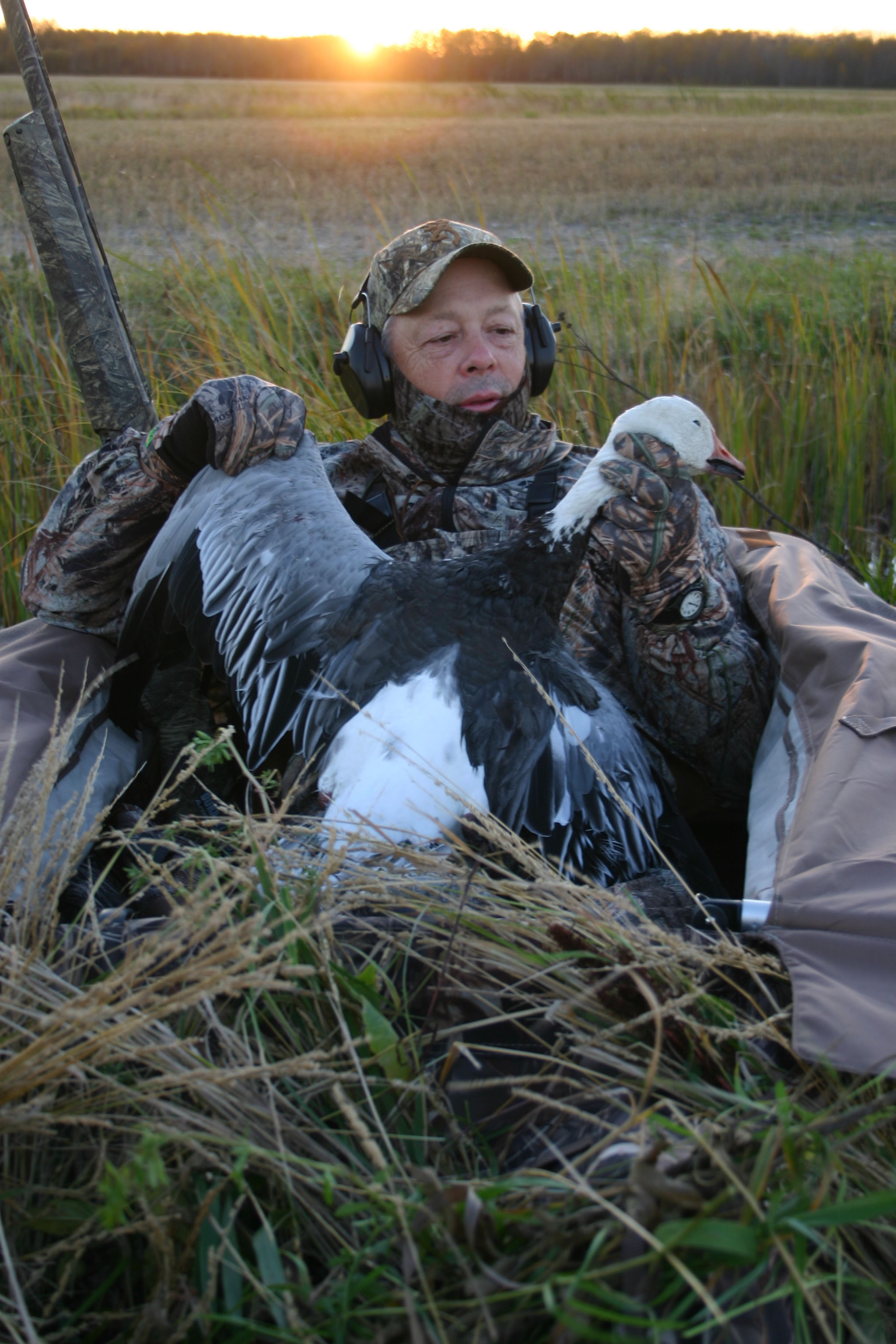 Outfitter or Guide?
Ask yourself: What do I want?

“I want a good duck hunt” isn’t enough. Each of us wants different things from the activities to which we commit our money and precious time.

Maybe a certain species or hunting method drives you. Do you want to shoot only greenheads? Are you into collecting diverse species? Are you a diving duck fanatic? Do you want to try layout boat gunning? Is it sea ducks you’re after?

You also need to determine what level of service you want. What’s the difference between an outfitter and a guide service?

At minimum, an outfitter generally provides accommodations, a place to hunt, and local knowledge. They might also provide meals, equipment and/or local transportation. An outfitter might have guides or recommend a guide service, but either generally comes at additional expense.

A guide service is primarily that: hunting guides who assist you in the field. Most often you’ll use the guide’s equipment and hunt locations to which he/she has arranged access. They often provide specialized equipment such as airboats, layout boats and stuffer decoys. They sometimes offer accommodations, but usually you’re responsible for your own. Many times, you’ll meet the guide at a prearranged location the morning of the hunt.

Finally, what level of luxury do you want? On arrival at some high-end lodges, you might be asked your cocktail of choice so the staff can have it waiting when you step onto the dock at the end of the day. Many are like “all-inclusive” resort vacations.

On the other end of the scale are the places providing an old cabin or trailers. Some simply arrange fields or sloughs for you to hunt and give you GPS coordinates to find them. You bring a sleeping bag and fend for yourself. Perhaps there’s a clubhouse where you can clean birds and gather after the day’s hunt, but you cook your own meals and bring your own beverages.

Both are legitimate choices for your hunt of a lifetime. And, of course, there are many operations (and desires) in between. Before you begin searching and planning, you must know what you want.

Hunting Partners
Waterfowl hunting is different than big-game hunting. Waterfowl hunting is more social, and if you’re hunting without a guide, you rely on your partners. While it’s not uncommon for a hunter to book a wild sheep hunt with only a guide, waterfowl hunters mostly hunt in pairs or larger groups.

Next to the selection of a trustworthy outfitter/guide, who you travel and hunt with can make or break your next hunt of a lifetime. Usually, hunting with close friends or family who have hunted together for years is no problem. But as the group grows and connections become more extended, problems can arise.

To assure enjoyment of a hunting trip, you need to know you’re traveling with people who can roll with the punches. Something small or monumental is bound to go wrong. A vehicle will break down, there will be travel delays, a dog will get sick — something will happen. Surrounding yourself with the right companions will make these things memorable parts of the adventure rather than destroy everyone’s fun.

Money Matters
Even if you’re making your next hunt of a lifetime without an outfitter or guide, it’s going to cost some money. Travel, accommodations, meals, trespass fees, licenses, gun permits, ammunition and incidentals add up.

While you and your group should set a budget as you begin planning, make sure it’s generous. Don’t scrimp. Few things suck the enjoyment from an adventure more than negotiating, penny-pinching and worrying. Especially when you’ve booked an outfitted or guided hunt, pay the money then forget it! Immerse yourself in the adventure.

This is difficult for many, and impossible for some. But if you’re counting the days by cost or running calculations in your head of the price per bird bagged, it’s guaranteed you’ll have a miserable time, and you’ll be bringing your buddies down. 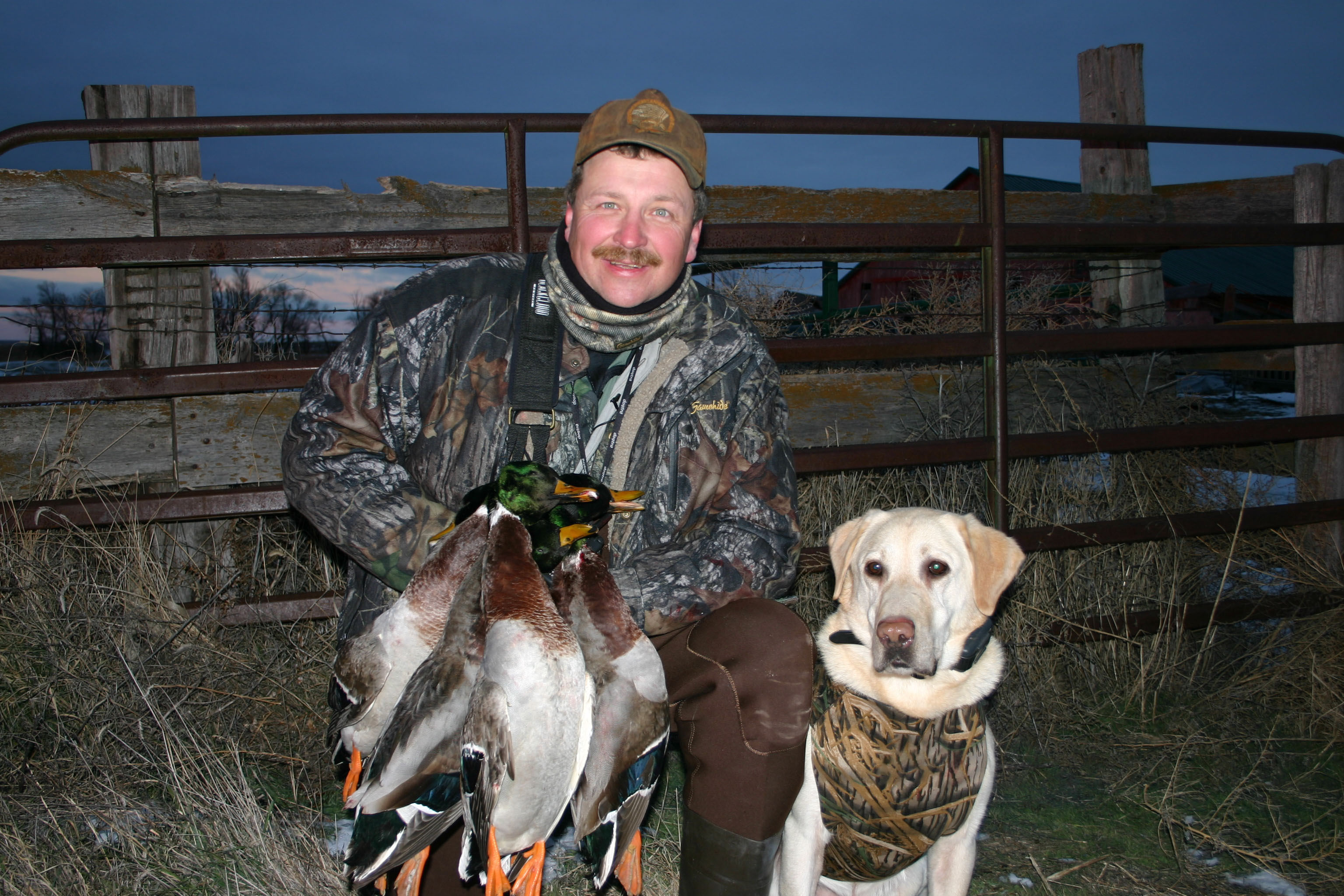 Adding Activities
Consider whether the trip will be all hunting, or if you might add a little bit more. If you want to include your family, but some members aren’t into hunting, what could you add to the trip for them? Maybe they’ll “dip a toe” into hunting, but with the promise of their favorite activities, too.

Even for hardcores, adding to a trip might be appealing. Personally, I love high-volume wingshooting in Argentina for doves, pigeons, ducks — anything that flies. I hooked up with a great outfitter, so I began inviting groups of friends.

The standard M.O. is to arrive in Cordoba early. You’re picked up at the airport and driven to the lodge. You’re served a great lunch, and you shoot in the afternoon. This is followed by two days of morning and afternoon shoots broken up by gourmet dining, siestas and great wine. The fourth day, you have a morning shoot, lunch, settle your shell bill and head to the airport to fly home. While it’s hard to call it a “grind,” that schedule can wear you out.

Our last group agreed to slow the pace a bit. We arrived in Cordoba on the morning flight, but instead of going to the estancia, we booked rooms in the city that first day. We slept for a few hours. We hired a guide for a walking tour of Cordoba in the afternoon, then dinner and a good night’s sleep. The driver from the lodge retrieved us the next morning, and we began the hunt on the usual schedule. The extra day to catch up on sleep and see the sites made the trip more relaxing and memorable.

Roll with It
No matter how carefully you plan, no matter how experienced your outfitter or guide, situations arise beyond anyone’s control. Weather and vagaries of the migration are biggies.

Guides and outfitters might have alternatives, but they’re probably limited. If you’re freelancing, you can move to another state or province, but is it a reasonable choice?

With the right attitude, no matter what happens, you can pull lasting memories from any hunt. Such was our trip to Old Harbor on Kodiak Island in Alaska.

Although I was invited after all the plans were set, I trusted the group that invited me. We had hunted together before and knew we could get along. They’d chosen an outfitter who said the two weeks leading up to Christmas were best for both the coastal duck hunting and pursuing Sitka black-tailed deer on the beaches. While my focus was on ducks, others wanted deer.

Our accommodation was a large houseboat. On the first morning, the boat would head to the hunting area, and we’d stay for four nights using launches to go ashore to hunt. Great hunt-of-a-lifetime potential!

Two problems. When we landed in Old Harbor on the charter plane, the temperature was below zero, which was unusual in this coastal climate. The forecast was for snow and high winds.

When we arrived at the houseboat, it appeared the outfitter forgot we were coming. Everything was locked up tight and looked like it had been winterized. Phone calling got the outfitter’s father-in-law to let us in, and to turn on the heat. Heat was good, except as the frost inside the cabin thawed, it turned into a half-inch of water on the floor. Oh well, we were still going to hunt ducks and deer on Kodiak!

With the weather forecast, the captain wouldn’t leave the harbor that day, or the next, or the next. Finally, there was a break long enough to let us leave before daylight and return at dark.

We hunted half a day, and it was magical. I shot seven species of ducks, all in full plumage, including a double on hen and drake common goldeneyes (now on my mantle.) Today, when I close my eyes, I can see mountains rising out of the water clear as a bell one minute and obliterated by a snow squall the next. My compatriots took their deer and saw all kinds of winter Kodiak wildlife.

Then, bad weather set in again. On the day we were supposed to fly home, it cleared, but by then flight service was so backed up, they radioed we wouldn’t make it out that day and perhaps not the next! 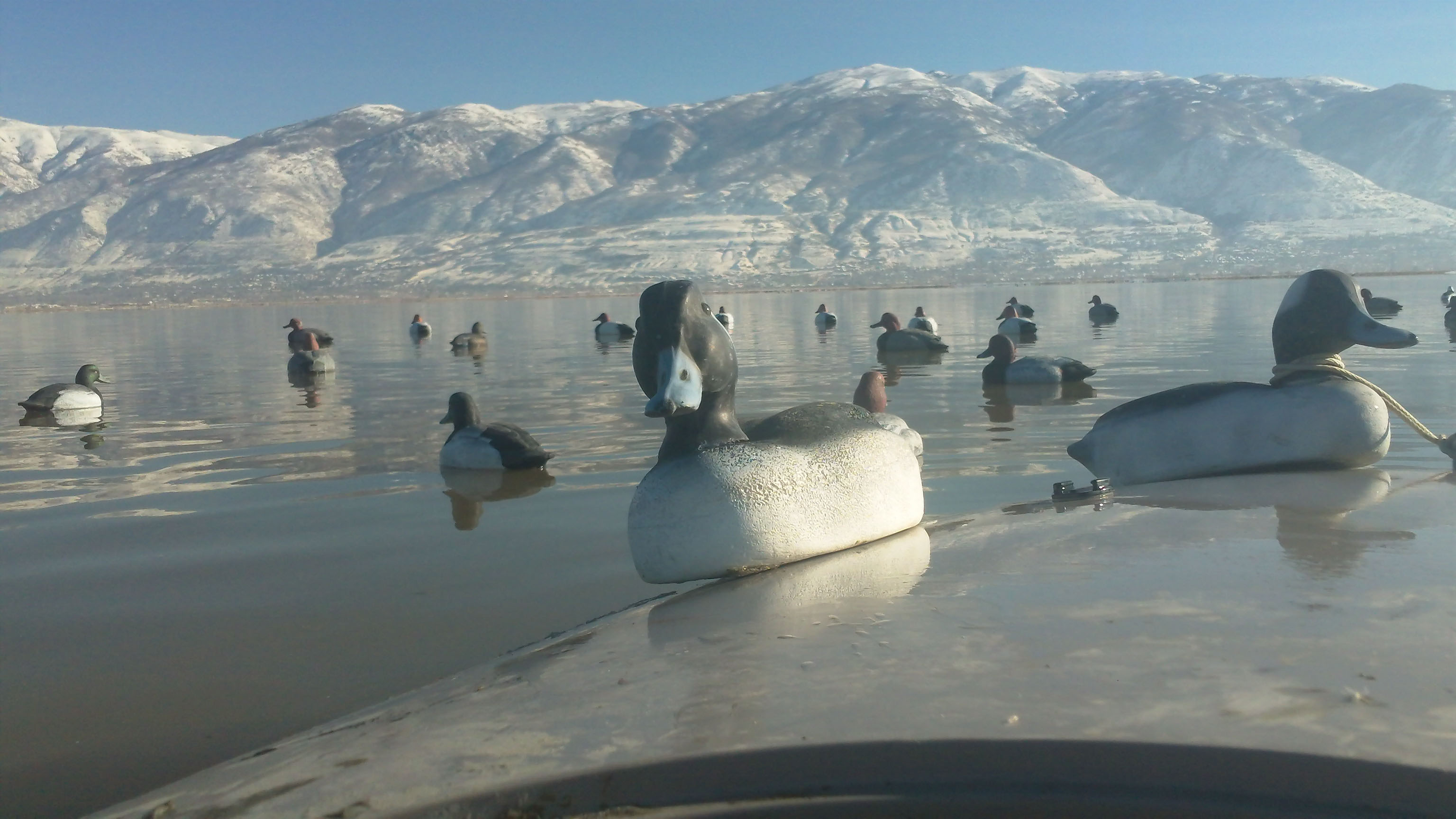 We scurried to find accommodations for at least one night, but then just before dark, we heard a plane. Shortly after it landed, our host got a call — our charter was there. We raced to the landing strip, threw our gear into the plane and crawled in. With a local schoolteacher who wanted to get home for Christmas joining us, it was a tight squeeze.

Being the biggest, I sat in the right hand seat next to the 20-something pilot. As we looked down the unlit strip into pitch black, I looked at the pilot and asked, “Are we going?”

He said, “No problem,” and gave it full-throttle. I knew at the end of the strip was the cold Pacific.

We took off into the darkness, but ascended to see over the mountains and lock onto the city lights of Kodiak. They were a welcome sight.

Delays in Kodiak prevented us from catching our flights in Anchorage. We landed as they were departing.

The Anchorage Airport was jammed with holiday travelers. It was early morning Dec. 22. At the service counter, the agent peered over his half-glasses and said, “Well, I can get you reserved seats on … Christmas morning.”

We were dead men! Our families would kill us if we didn’t make it home before Christmas. The agent recommended we put our names on standby lists for any flight going to the Lower 48, then worry about the next leg from there.

It was a crazy night. I remember seeing someone standing in line to check in with his baggage — two brand new snow tires — must have been a gift for someone? Thanks to a car fire that closed the airport road for over an hour, we all caught flights and made it home for Christmas.

Hunt of a lifetime? Absolutely! Did we make memories? You bet! Would I do it again? Let’s go! That’s what the right attitude can do for you.

Bill Miller of Carver, Minnesota, has experienced many “trip-of-a-lifetime” hunts.