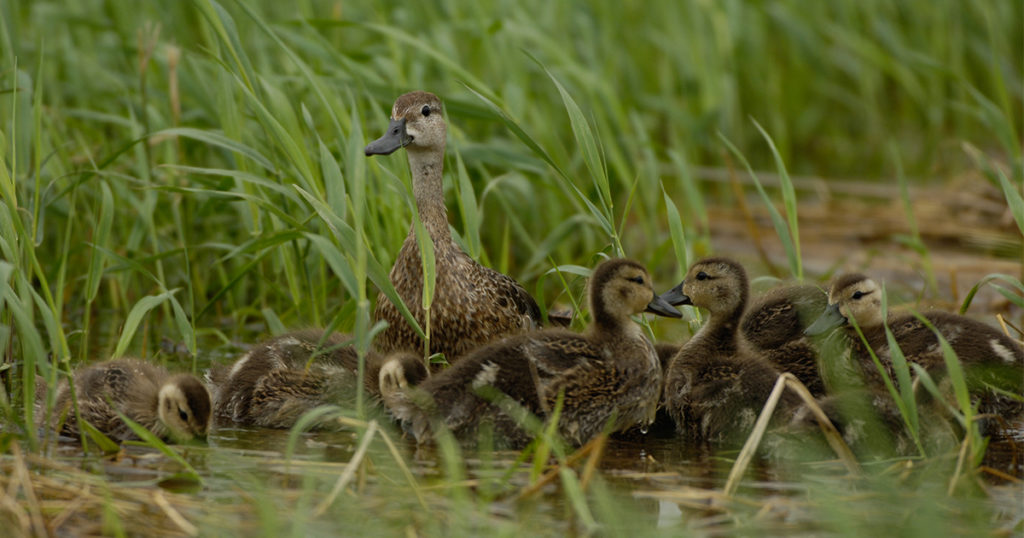 Waterfowl hunting gear catalogs have begun to arrive in mailboxes, and those decoys in the garage attic seem to be calling ever-louder for preseason attention. Each day, more of us begin to wonder, “What will we see for ducks this year?”

As we wait for the USFWS 2019 Waterfowl Breeding Population and Habitat Survey in August, reports from individual states have trickled in. While the state reports don’t offer a full picture — for example, that it’s dry on the Canadian prairies this year — they offer a glimpse at breeding duck populations during the nesting season.

California
After a notable recovery in the 2018 Golden State survey over the 2013 to 2016 duck drought, the 2019 survey reports 470,750 ducks, a 14 percent year-over-year decrease in total breeding population. The decrease comes despite improved water conditions, with normal to above normal precipitation in most survey areas.

Specifically, mallard populations decreased 14 percent from 2018, and remain 28 percent below the long-term average. The most-abundant species in the survey, 239,831 mallards were estimated. All reporting areas, but one, showed decreases in mallard populations compared to the 2018 survey.

Pintails marked a second straight year of decline, dropping 23 percent from the 2018 survey, and to 8 percent below the long-term average.

California’s Canada goose estimate of 48,588 represents an 11 percent decline, but still maintains the population of honkers at 11 percent above the long-term average.

North Dakota
“Water, water everywhere” best describes the wetland conditions in all but North Dakota’s north-central region this spring. The result is a very good breeding season shaping up for waterfowl in most of the Peace Garden State.

The North Dakota Game and Fish Department’s 72nd annual spring breeding duck survey, conducted in May, shows an index of 3.4 million birds, which is up 20 percent over the 2018 survey. It is the 22nd highest count on record, and puts the state’s overall population 40 percent above the long-term average.

Survey results indicate numbers for all primary species were up from their 2018 estimates, including mallards (16 percent), green-winged teal (81 percent) and ruddy ducks (57 percent). Other ducks ranged from scaup (up 5 percent) to pintails (up 40 percent). All species, with the exception of pintails and blue-winged teal, are above the long-term average.

The number of temporary and seasonal wetlands was substantially higher than 2018, as figures show the spring water index is up 46 percent. This index is based on basins with water, and does not necessarily represent the amount of water contained in wetlands or the type of wetlands represented.

“Water conditions range from poor to excellent across the state,” Szymanski said. “Excellent wetland conditions in the south and east quickly deteriorated moving into the north-central region, but are fair to good in the northwest.”

The overall breeding duck population in Wisconsin is 413,662, down 6 percent compared to 2018 and slightly below the long-term average. However, the excellent wetland conditions should mean good brood success.

The mallard population estimate of 204,296 is down 7 percent from 2018, but remains 46 percent above the survey average. As in previous years, Wisconsin’s southeast-central region represents the largest portion of the breeding mallard population, totaling 55 percent of ducks counted.

The 2019 population estimate for blue-winged teal is 61,946, which is 37 percent higher than 2018, but remains 41 percent below the long-term average. However, it should be noted that during the regular duck hunting season in Wisconsin, about two-thirds of the blue-winged teal harvest relies on teal that breed outside the state, especially in the prairie pothole region.

Wood ducks breeding in Wisconsin continue to be an important and relatively stable portion of the breeding duck population. The 2019 estimate for wood ducks is 100,027. The tally represents no change from 2018, and wood ducks remain 24 percent above the long-term average.

The 2019 estimate for other ducks is down significantly. Numbers decreased 39 percent from 2018 and 27 percent from the long-term average.

A Canada goose estimate of 171,407 is up 9 percent from 2018, and sits at 71 percent above the long-term average. Wisconsin counts on locally produced birds for about 60 percent of its Canada goose harvest each year.

What will be revealed by the continent-wide 2019 Waterfowl Breeding Population and Habitat Survey? Stay tuned to DeltaWaterfowl.org and Delta’s social media channels — Facebook.com/DeltaFans and @DeltaWaterfowl on Instagram and Twitter — for breaking news and expert analysis of survey results as soon as they are available.