Skip to content
Previous Next
Float Your Way to More Ducks

Float Your Way
to More Ducks 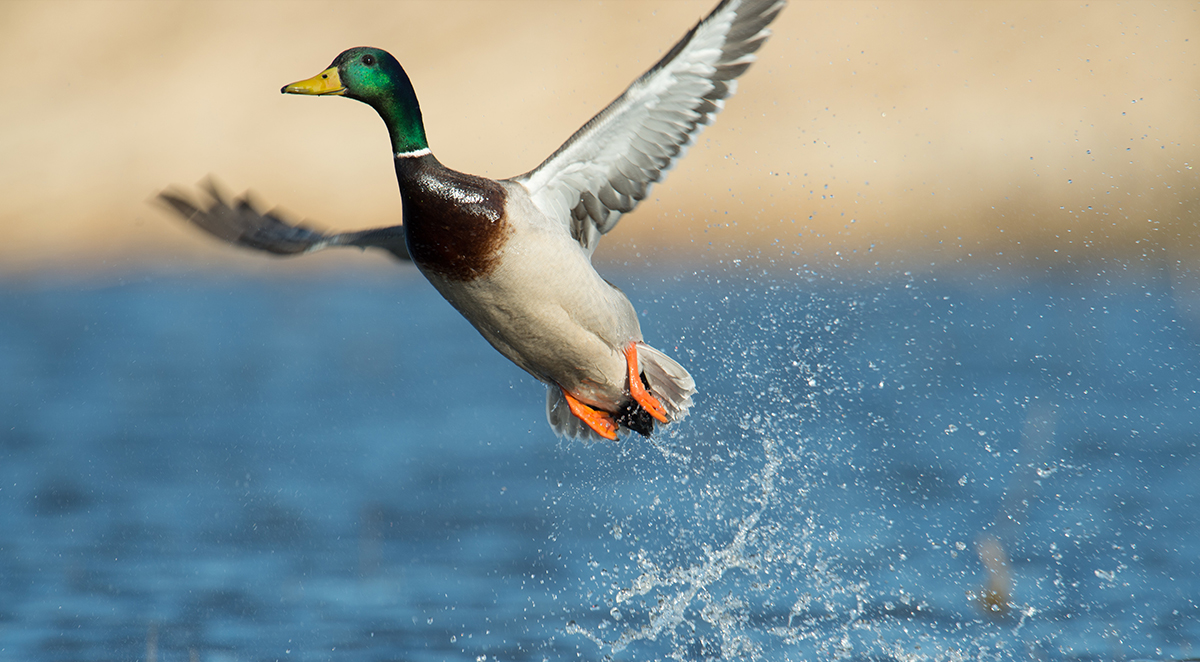 It’s one of my favorite personal hunting photos of all time. Unfortunately, it was from the era when 1-hour photomats used that delicate, plasticky kind of paper. So even pressed in the pages of a photo album, it has deteriorated significantly in the past, going on 40 years.

It’s a snapshot of my best high school hunting buddy, Mike, sitting at the stern of an aluminum canoe, wearing a turned down Jones-style hat in woodland camo — the only pattern we had back then. What makes it so special is the look on his face. He’s sweaty, a bit perturbed and his expression shouts, “Lord, I can’t believe we just did that.” 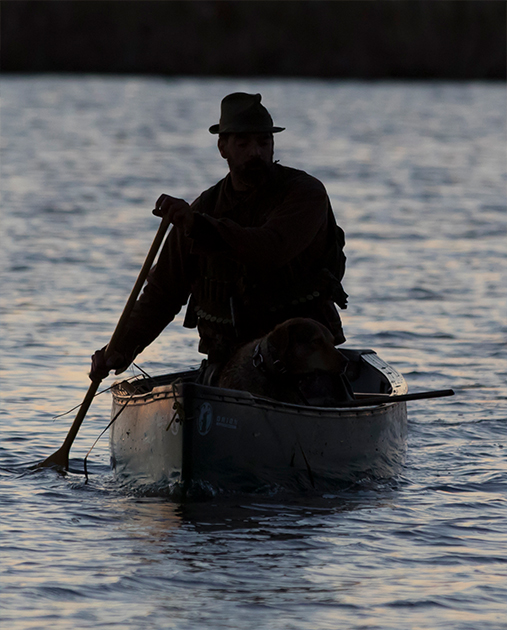 Behind him is a solid wall of green cattails. They are well beyond head-high, but through the middle of the stand is a brand new trail precisely as wide as the center beam of the canoe. In our scouting mission on the tiny Onion River, we’d just created a route where none had existed before — at least not since the previous hunting season.

The photo was probably taken in early September, about a month before the duck opener.

Every summer, the cattails grew up solid across that section of the river, so each fall some would-be float hunters needed to open the path again. That year it had been our turn to go first. It was hard, hot work in the late summer heat, but that stretch of river turned out fantastic early-season wood duck and teal shoots. And right before ice-up, we could always count on it to hold pockets of big greenheads with orange legs.

That’s one of the big joys of floating a canoe or small boat with the current in search of ducks and geese — it’s effective throughout the entire season. In fact, in the mid-season doldrums, when traditional marsh, big-water and field hunting slow down, winding waterways with lots of backwaters often stay hot.

Many waterfowl hunters (including me) found their passion for the pursuit in its complexities. There’s so much to it: calling, decoy strategies, bird identification, dog training, shooting and more. To master waterfowling takes a lifetime of learning. That’s exciting. It’s what keeps us coming back. It makes every hunt different.

Yet the joy in float hunting is exactly the opposite: It’s as basic as duck hunting gets. You and a hunting partner plan a float that takes you downstream, letting the current do most of the work. You shoot ducks that you jump along the way. It takes you back to the days before the mountains of high-tech hunting gear. Pure simplicity!

Float hunting is also active. In other forms of duck hunting, you can do everything right, but if the ducks don’t move that day, you won’t be shooting any.

In float hunting, you’re covering ground. You go out and find the ducks. You stick the bow of your boat into their hidey-holes to roust them out. You make the action happen.

Float hunting can be a team or individual effort with equal success, although it’s easier with a buddy. On a well-planned two-person float, you can park one hunter’s vehicle at a take-out point, drive the second vehicle with the boat to a put-in location and never have to cover the same water twice. One hunter shoots at a time from the bow seat of the boat, canoe or tandem kayak. The hunter in the back paddles, steers and handles the dog. Before you leave, flip a coin to see who starts up front and figure out when you’ll switch — shot by shot, after a bird is bagged or whenever.

In our years of hunting together, Mike and I became a deadly team. We each knew what the other would do before he did it. That kind of synchronicity is a joy to experience.

On the other hand, with the advent of hunting-specific kayaks and other small, stable boats, it’s very possible to float hunt safely and successfully on a solo mission. A morning with just your dog, the mist rising off the creek and the sun coming up, is something every duck hunter should experience. It’s definitely among waterfowl hunting’s near-religious events.

Just remember, without a downstream pick-up arranged, you will have to propel yourself back to your starting point. That will take effort and time, so make sure you plan it into the schedule for your hunt. And as always when hunting alone, be sure to let a responsible someone know where you’re going and when to expect you back.

In bygone days, the term “duck boat” was often synonymous with a tippy little watercraft meant to be secured solidly in the mud or among the cattails before the guns were loaded. Today’s hull designs, added floatation options and high-tech materials make boats, canoes and kayaks all great options for float hunting. Here are the features of a perfect float-hunting watercraft.

Stability: The most important characteristic is a stable shooting platform. While you should only shoot from a seated position, the ultimate craft is so stable it’s difficult to capsize even when standing. Such hulls will generally be wide and flat with additional floatation materials built in.

Silent Material: The last thing you want is a squeak or clang to alert ducks before you’re in range. Plastic and foam materials are much quieter than aluminum. You can further increase your stealth by covering the shaft of your paddle with pipe insulation to prevent banging against the gunwales.

Lightweight: Besides being easier to deal with for transport, a lightweight craft with a shallow draft will allow you to stay in the boat through all but the shallowest of shoals. Especially in low-water seasons, that’s an especially nice advantage.

Maneuverability: A nimble boat allows you to easily put it exactly where you want it, not just where the current takes you. For example, you’ll want to hug the inside bends in the river to put you as closely as possible to ducks hiding in the slow water on the back of the point.

Low Profile: You want to give ducks as little to look at as possible. A low-profile craft in which you can lie back (like the big water sculling boats of old) can make the ducks think it’s nothing but a deadfall floating their way. Another option is to brush the bow, so you can bend forward in your seat behind the leafy limbs.

Hands-Free Operation: Especially for solo hunting, hands-free propulsion and steering are huge advantages. Some kayaks are propelled by pedaling an underwater drive system that work like a penguin’s flippers. They are steered by a rudder control handle next to the seat, which can be set quickly with one hand.

Heavy Duty Portage Wheels: At times, it’s necessary to portage your float-hunting watercraft, especially when hunting alone. Not just any beach tires will do, though. Buy or build a set of portage wheels that can handle the weight of your gear and the terrain.

When you’re young and full of energy, you seek out the places where few other hunters will go. Mike and I did a lot of float hunts on stretches of streams and creeks that rarely saw a canoe besides ours. There were several favored stretches in which we always had to stop at least a couple of places each season to cut out deadfalls that blocked the way or explore for new portage paths.

Sometimes those paths require landowner permission to use. If you’re planning your first floating forays in your area, it’s important to check the laws regarding access to waterways. In fact, in some places it’s not legal to float hunt at all. You also need to know the laws regarding retrieving downed game from private property. The water you’re floating on might be legal to hunt, but if a duck goes down on privately owned shoreline, you may be required to leave your gun in the boat or even have specific permission to send your dog ashore for the retrieve.

It’s also a good idea to scout planned float routes before the hunting season each year. Landscapes and property ownership can change from season to season, so you’ll want to monitor them.

With knowledge of the laws and the land well in hand, a big joy of float hunting is it tends to take you to places that see little to no hunting pressure compared to well-known public areas. You can end up hunting honeyholes you never would have known existed if you stuck to waterways more travelled.

In northern Minnesota, for example, there are designated waterfowl resting areas on sections of many rivers. These zones are open for hunting, but prohibit the use of any motorized vehicles — including boats with outboards — during waterfowl season. Float hunting is a great way to explore these areas for otherwise hidden spots to set up an impromptu decoy spread. Many of the zones incorporate beds of wild rice, which attract puddle ducks, divers and even geese. It makes for interesting variety in the day’s bag and the resulting photos.

Soak in the Experience

On one of our hunts on a little-known creek that serves as a backdoor to a major public area in eastern Wisconsin, Mike and I had an experience I’ve never duplicated in the nearly four decades since. Mike was in the stern of the canoe paddling and steering, while I was in the shooting seat up front.

We rounded a sharp turn and eased into a long, slow, straight stretch. A big mallard came speeding down the river, ripping straight at us below the treetops. I mounted the gun and pulled ahead of the duck at about a 60-degree angle.

That duck was close when I shot, and I was so mesmerized by the feather details and rapid wing beats, I know I stopped the gun. The super-tight choke on that old 870 combined with the then new-fangled steel shot produced a pattern with no margin for error. It was a clean miss.

Yet, instead of flaring and pumping for the sky, that greenhead folded its wings like a dive-bombing falcon and lunged headfirst into the tannic black water just a few feet in front of the canoe! Mike and I looked at each other with slack-jawed surprise, then frantically surveyed the surrounding rippled surface to see where the drake might come up. We never saw him again.

Is this another joy of float hunting — discovering experiences that you’ll never encounter anywhere else?