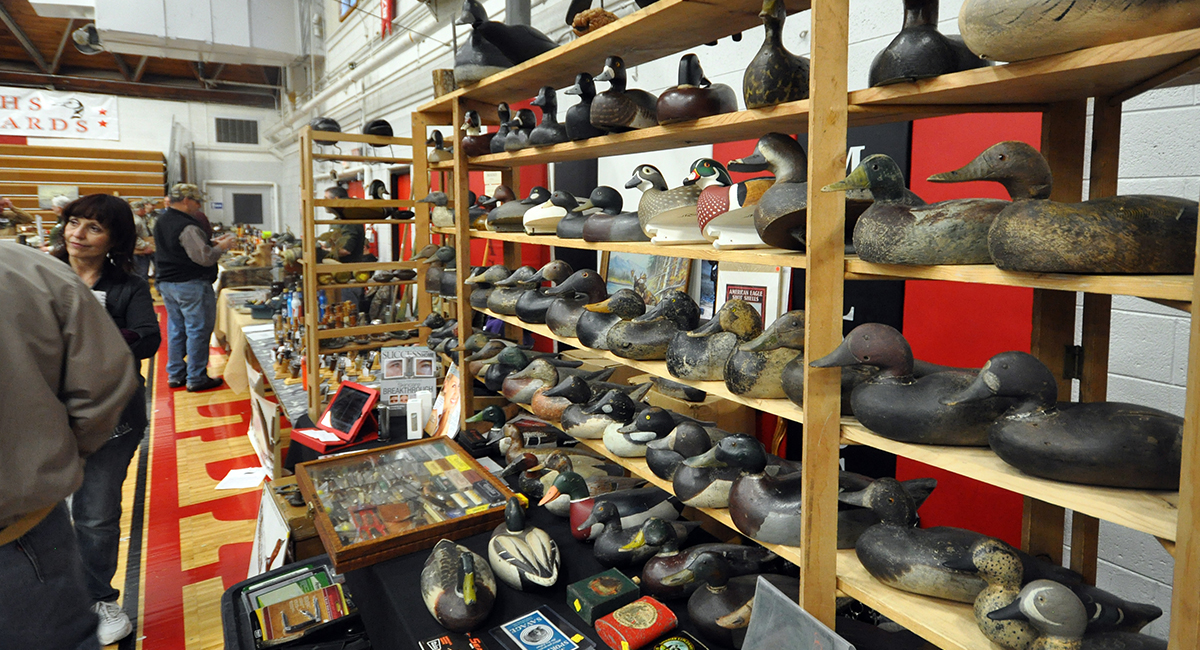 Rich history can be discovered through blocks of wood

Fifty feet down the first row of tables covered with elegantly displayed, handcrafted vintage duck decoys, my eyes were drawn to the floor. Ignoring the finest of the vendor’s lot of high-priced collectibles, I knelt down and plucked a wooden bird from his pile of “other” decoys stationed below the table.

“What can you tell me about this decoy?” I queried.

“I’ve had that one a while,” he admitted. “It’s a Wisconsin bird, and I don’t deal much in Wisconsin decoys.”

The decoy, an oversized drake bluebill with a narrow head, exaggerated bill and deep body, was clearly a vintage gunning block. I flipped it over, and saw a name written in ink pen on the bottom. Clearly, the ink was recent, and not a maker’s stamp. 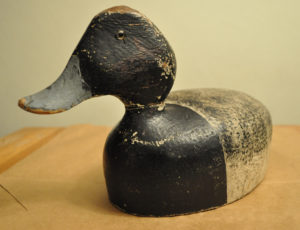 “The name of the carver is written on the bottom,” the decoy dealer confirmed.

I had never heard of him, nor had any clue whether the decoy was worth the asking price, but I knew right then I was walking out of the gymnasium with that bluebill.

“I’m interested,” I told the vendor. “I have a friend at the show. Could I take it over to him for a few minutes to see what he knows about the decoy?”

Several rows of tables away on the Henry-Senachwine High School basketball court, my friend, Pat Gregory, a master decoy carver from Bloomington, Ill., was displaying his own work. Gregory confirmed the bluebill as a Wisconsin style carving, and pointed me to another fellow at an adjacent booth. The gentlemen, a native of Neenah, Wis., rattled off, “Van Kauwenbergh, from the 1940s.” He assessed the condition and gave me a value range, pointing out that the decoy’s paint had been touched up very slightly.

My detective work complete, I returned to the vendor to make the deal. As I paid the fellow, I spilled a little personal info.

“I’m originally from Wisconsin,” I revealed. “I hunt on Green Bay, and I love bluebills.”

What I didn’t tell him was I had just purchased my first collectible decoy.

However, it’s not my first hand-carved decoy. Over the past few years, I’ve been adding to my diver rig with modern wooden decoys. I have a ruddy duck, a redhead, a pair of bluebills and a newly acquired Pat Gregory ring-necked duck. Those birds have led to my interest in old working blocks. And it’s not lost on me that someday, all of them might draw the interest of collectors.

I don’t know if I’ll ever become a serious decoy collector, but buying a vintage bird or two is a natural progression for me. I’ve always been a decoy nut. I cannot go to a sporting goods store without looking at decoys. I have owned an untold number of duck and goose decoys, and can employ spreads for almost any style of hunt I might need to conduct.

As I’ve grown in experience as a waterfowl hunter — 33 seasons now — my appreciation for the history of duck hunting has blossomed.

In early 2012, I visited the Ward Museum of Wildfowl Art in Maryland, where I was treated to a tour of the historic folk art produced by legendary Chesapeake Bay decoy makers Lem and Steve Ward. Not long after, I attended the 2012 Henry, Ill., decoy show, and visited the Charles Perdew Museum, where the famous Illinois River craftsman turned out his fine decoys and duck calls.

But until February, I hadn’t made the leap into collecting.

As soon as I made it home from the decoy show, I started searching for information on Van Kauwenbergh. My initial efforts drew no info, but then I found a nugget: My carver had been profiled in Decoy Magazine in the Jan/Feb 2002 issue. I wasn’t able to find the article online, but was buoyed by a listing that the back issue was available for sale. I ordered it, and a subscription to the magazine, the next day.

A few days later, the mystery of my bluebill decoy disappeared as I read the article about Jack Van Kauwenbergh, which was written by his grandson, Gary Van Kauwenbergh. But before I dove into the text, I noticed the photo halfway down the lead page of the piece: The decoy pictured is identical to my bird.

According to the article, Jack Van Kauwenbergh was a street sweeper for the city of Green Bay by day, but enjoyed working with wood. He made trailers and boats, and in 1938, began carving duck decoys after associating with a trio of local duck hunters. He turned out decoys for five years, making bluebills, canvasbacks and mallards, mostly hollow cedar designs, although he did experiment with cork bodies one winter. He sold decoys through two Green Bay sporting goods stores. The family estimates Van Kauwenbergh made more than 1,000 decoys, more than half of which were bluebills in four known patterns. He quit producing decoys in 1943.

Quite fitting, isn’t it, that 70 years later a displaced Wisconsin bluebill hunter was drawn to one of the Green Bay maker’s gems on a gym floor in Central Illinois?

Decoy-obsessed Paul Wait is editor and publisher of Delta Waterfowl.