Because of the extraordinary qualities he has displayed as the chairman of the Michiana Chapter in Middlebury, Indiana, Delta Waterfowl has named Vaughn the organization’s 2020 Stoeger International Volunteer of the Year. 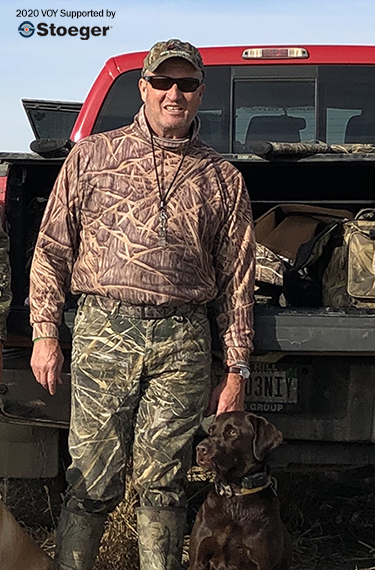 Brian Moyse, Delta regional events director for Illinois, Indiana and Michigan, nominated Vaughn for his unsurpassed dedication to the mission of The Duck Hunters Organization.

“His energy and vision has led the Michiana Chapter to the next level in terms of fundraising, WHF (Waterfowl Heritage Fund) projects and community involvement,” Moyse said. “Vaughn is truly an ambassador for Delta Waterfowl, waterfowl conservation and HunteR3.”

When Vaughn took over as chairman in 2015, the committee now comprised of two-dozen dedicated men and women set a goal to become the region’s top fundraising chapter. In 2019, they achieved that benchmark. Now, Vaughn said the new goal is maintain that status.

“We have an excellent committee backed by a strong community,” he said. “It’s a team effort, and it’s worked out really well. Volunteer of the Year is the whole committee’s honor.”

Vaughn, 58, a plant manager at a plastics company, has made it a personal mission to mentor new hunters. In fact, last season, Vaughn often left his own shotgun in its case and instead focused on taking a dozen first-timers with him to his favorite goose hunting pond.

“Every day that I went to my normal spot, I had kids with me. All of the kids shot their first birds, and two adults who’d never hunted before went with me too, and they also shot their first birds,” he said proudly. “It was a blessing to me to see the smiles on their faces. I feel like I have something I want to give back. Any time I have the chance to take a new hunter with me, I’m going to do it.”

Vaughn was chosen as Delta’s 2020 Stoeger International Volunteer of the Year out of a field of 255 local chapter nominees from throughout the United States and Canada. Delta’s VOY Program was generously supported by Stoeger, which produces “Every Day Tough” inertia-driven shotguns. Vaughn will receive an M3500 Waterfowl shotgun, an M3500 Predator/Turkey model and an M3020 Upland Supreme gun.

A humble, but decorated veteran with more than 24 years of service in the U.S. Army and Army Reserve, Vaughn was caught off-guard when Moyse assembled the Michiana Chapter committee to announce the award to the group.

“It blew me out of the water to be named Volunteer of the Year,” Vaughn said. “It’s a blessing for me and the committee. I have received several military accolades during my career, and VOY ranks right up there with them. I was thrilled to be named one of the seven finalists. I never imagined I’d be the one.”

Delta’s more than 3,800 dedicated and passionate chapter volunteers are the lifeblood of The Duck Hunters Organization.

“We greatly appreciate every one of our volunteers for their efforts and service to waterfowl conservation — all of which benefits ducks and duck hunters throughout North America,” said Dr. Scott Petrie, chief executive officer of Delta Waterfowl. “We extend our thanks and congratulations to Mr. Vaughn, as well as to all of the finalists and local chapter nominees for their incredible passion, leadership and hard work.”