Is it time to ditch the ear pinch? 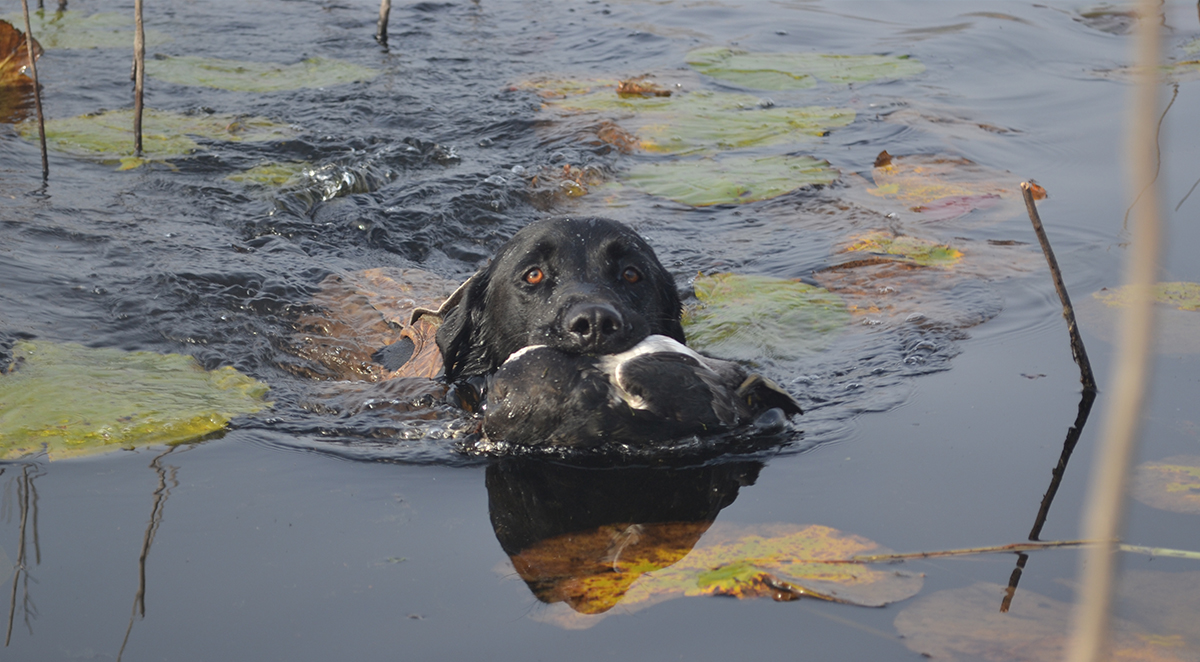 Whether you desire a “finished” Lab or one that simply completes marked retrieves, all duck dogs must fetch on command and hold the duck for delivery to hand. The need to fetch is self-explanatory, but a proper hold is equally important — ask anyone whose dog prematurely released a crippled diving duck.

In well-bred dogs, such fundamentals are largely instinctive, but they must be honed in some fashion through training. A hugely popular technique is known as “force-fetch,” also called “force breaking” or “the controlled retrieve.” The conventional method involves harsh negative reinforcement: Delivering an ear pinch, toe hitch or e-collar stimulation to the dog until the desired result — holding a bumper, and later, fetching it — is achieved. After completion of force-fetch training, the “hold” and “fetch” commands may be enforced, typically with an e-collar. 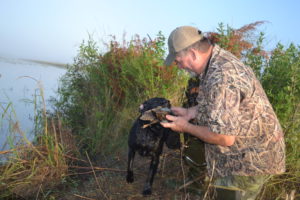 “Force-fetch came about mainly so the dog holds the bird correctly and doesn’t drop it,” said Steve Biggers, owner of Rocky Creek Retrievers in Brenham, Texas. “However, when trainers really got into it about 20 years ago, the goal was as much to force the dog to complete various drills as it was to retrieve.”

Force-fetch’s popularity among pros trickled down to amateur trainers, and today it’s widely considered a standard step in any retriever program. Ask a first-time duck dog owner about plans for the pup, and force-fetch is inevitably on the early checklist. But should it be the default approach?

The downside to old-school force breaking, says Biggers, is it’s easily misapplied by the inexperienced and it can have lasting consequences for meek dogs. It’s not terribly pleasant for trainers, either.

“I was an old-fashioned, ear-pinch guy, but my opinion has changed,” Biggers explained. “I got to the point where if I had to pinch another ear, I was going to quit. Then 10 years ago, I was taught a pinch-free method by the legendary Bill Hillmann at Hawkeye Kennels. It’s still a form of force-fetch in the sense you’re teaching the dog ‘hold’ and ‘fetch,’ but it’s gentle — you’re conditioning the dog to the desired responses, not really forcing him to do anything.”

Whereas traditional force-fetch is an intensive period of training in which the dog experiences little else, the method devised by Hillmann begins when the dog is a pup and is continually revisited into adulthood. Biggers, who’s added his own wrinkles to the system, starts when his pups are 3 months old by teaching them to hold a leather gardening glove.

“You can tell the pup ‘hold,’ give him the glove and go for a walk on a leash,” Biggers said. “There’s something about that leather — they just love holding it — and it’s less likely than a bumper to irritate puppy gums. Later you can toss the glove on the ground and tell your pup, ‘Fetch it up!’ That’s great early development, and the pup is just having fun, totally unaware he’s being trained to hold and fetch.”

Typically, when Biggers’ pups are around 4 months old, they have a grasp of “hold” and “fetch.” It’s at this point he begins a Hillmann-invented drill known as “Traffic Cop.” Hillmann has devoted entire DVDs to the process, but in its most basic application, it entails commanding a check-corded dog to “sit” (which should also be established at this stage), backing away about 10 yards and tossing a bumper a short distance behind you. You can then send the dog for the retrieve with its name or “fetch.” Positioning yourself between the dog and bumper allows you to play “traffic cop,” maintaining control and helping your pup successfully complete the fetch.

But what if the dog repeatedly spits out the bumper? If it’s mid-retrieve, you might need to revisit “hold.” However, if it’s at delivery, it’s likely unintentional.

“Many growing puppies aren’t coordinated enough to sit while holding onto a bumper,” Biggers explained. “A lot of it has to do with the weight, which is why I like tossing paint rollers. The dog comes back with it, sits — boom — it’s so light he forgot he’s even holding it. A lot of people would look at that same dog dropping bumpers and move right to the force-fetch table.”

The e-collar is not introduced in Hillmann’s fetch/hold system until commands are firmly understood by the pup. Biggers begins by dialing the e-collar to its lowest possible setting, then positioning the dog for the Traffic Cop drill. A bumper or paint roller is tossed, the dog is commanded “fetch,” and a gentle e-collar nick is promptly issued. The nick is not a correction, but rather a reminder of your authority, like telling your teenager to clean his room and delivering a light tap to his chest.

“The nick is purely a timing mechanism for the dog to respond and a reassertion of my command,” Biggers said. “It conditions the dog for future corrections, if necessary. I think (Hillmann’s) system is so simple that people are scared of it.”

An advantage of traditional force-fetch over Hillmann’s system is in its immediate results. Typical force-breaking is conducted over a period of just two to four weeks, but Hillmann’s method takes Biggers about three months to solidly instill.

“People still like the old force-fetch because it works right away, but a lot of dogs get their brains messed up by it,” Biggers said. “Now if I have 25 dogs in the kennel, only one or two may require the table as a last resort. That’s an incredible success rate.”

Though Hillmann’s system takes longer overall, the dogs don’t have to focus on it exclusively. That in itself reduces stress on the dog, whereas the intensity of force-fetch can sap the dog’s personality, confidence and desire to train. The effects can linger with softer dogs, Biggers said, and some potentially good retrievers can wash out entirely.

“Take my big yellow Lab, Goose,” Biggers said. “He looks all tough, but he’s truly just a softy. An ear pinch could’ve scarred him for a long time, and what a disaster that would’ve been for one of the best duck dogs I’ve ever owned. I like enthusiasm and drive, and since I quit pinching ears, you look at my dogs and their tails are always wagging. They’re happier, and I’m happier.”